Gov. Martinez's absence of any mention of the state's struggles with child poverty drew sharp criticism. 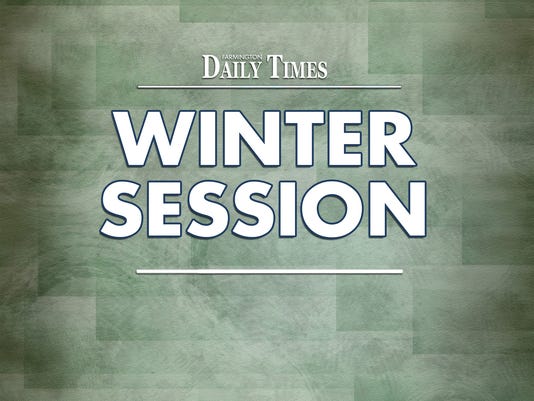 SANTA FE — At 6:55 a.m. on Tuesday, the first day of this year's legislative session, the Albuquerque nonprofit Voices for Children released its annual report that ranks states on the well-being of their children. A troubling statistic stood out: New Mexico's child poverty rate had fallen to worst in the nation.

Seven hours later, Gov. Susana Martinez delivered her State of the State address in which she sought to set the tone for the 30-day legislative session, emphasizing that lawmakers should pass a series of tough-on-crime bills.

The absence of any mention of the state's struggles with child poverty drew some sharp criticism.

State Rep. Brian Egolf, D-Santa Fe, the House minority leader, said that nowhere in the State of the State address did Martinez address the actual state of the state, including high child poverty rates and sluggish economic growth.

"After five years, what's the governor's plan?" he asked. "I don't think she has one."

Egolf said the first part of Democrats' plan to address poverty is a proposal to ask voters to tap into the Land Grant Permanent Fund, worth more than $14 billion, to help pay for early childhood education programs. Previous proposals to put the issue before voters in the form of a constitutional amendment have failed to pass.

On Wednesday, House Democrats introduced the proposal again. A bill filed by Albuquerque Reps. Javier Martinez and Antonio Maestas seeks voter approval to divert money from the fund, which receives royalties from oil and natural gas production and other income from land granted to the state by the federal government. The amendment would devote 1.5 percent of the fund each year to expanding early childhood education programs, and another half percent to traditional K-12 schools.

Allen Sánchez, president and CEO of Catholic Health Initiatives St. Joseph's Children, said Martinez's lack of mention of childhood poverty in her speech is "the whole point" of his Albuquerque nonprofit's three-week, $200,000 advertising campaign to raise awareness about the issue.

"It's a sad day when a nonprofit has to buy paid advertisements to raise awareness of the condition of our children living in the highest rate of poverty in the U.S.," he said.

Commenting that his group doesn't have the financial resources of Martinez's political action committees, Sánchez said St. Joseph's will not buy more advertisements beyond the three-week campaign.

Senate Democrats whose districts are outside Albuquerque and Santa Fe are among fiscally conservative lawmakers who have opposed the proposal to draw from the permanent fund for early childhood education.

Sen. Mary Kay Papin, D-Las Cruces, said she opposes taking from the permanent fund during a session in which economists are forecasting that New Mexico will not have any new revenue available to spend in the next budget year.

"This might be a whole different issue if we had the money," said Papin, president of the Democratic-controlled Senate.

The U.S. Census Bureau estimated in December that nearly 139,000 New Mexicans under the age of 18, or 28 percent of that age group, are living in poverty, higher than the national rate of 21 percent.

New Mexico Voices for Children, using 16 indicators, ranked New Mexico second-last in the nation in child well-being. Officials of the nonprofit said there have been some bright spots with declining teen birth rates and higher on-time graduation rates.

Martinez previously has told The New Mexican that her solution to addressing poverty in the state is to improve education. She pointed to her budget's call for increases in funding for pre-K programs. Her spokesmen did not respond to requests for comment Thursday.

Asked for a reaction to the governor's State of the State address, Veronica Garcia, executive director of Voices for Children, said, "We have an enormous crisis on our hands -- that is poverty."

"When our policies don't address the root cause of our problems, we will see minimal improvement," Garcia said in an email. "Of course, not all poor people commit crimes, and we know that poor children can learn, but again the research clearly shows that we need to mitigate the negative impacts of poverty if we want all children to do well in school and grow up to be contributing members of society. Approaches that focus on the symptoms will not make lasting positive change."

But Sen. Ted Barela, R-Estancia, echoed the sentiment of many lawmakers on both sides of the aisle.

"In the short budget session with no money?" Barela said when asked about poverty. "It's very difficult to keep all the programs that are in place functional."

He said job creation is the solution to poverty.