New Mexico voters today will decide whether Democrats or Republicans should control the New Mexico Legislature.

A container of "I voted" stickers sits on a desk at the Farmington Civic Center on Tuesday.(Photo: Jon Austria/The Daily Times)Buy Photo

SANTA FE — The nation's most Hispanic state tested its traditional partisan loyalties today as voters decide whether Democrats or Republicans should control the New Mexico Legislature and whether a popular former governor running for president as a Libertarian could serve as a spoiler for the major-party nominees.

The former two-term state governor joined sign-waving supporters on a street corner in Santa Fe, and said his campaign this year marks the start of a new political current in American politics.

"The movement is underway," he said. "I hope that it's a leaps-and-bounds growth situation." 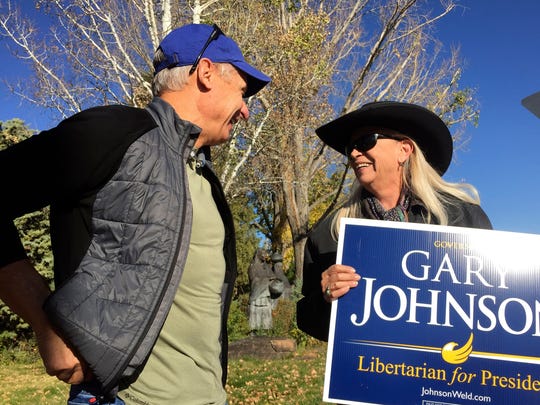 The entire state Legislature also is up for election, with Republicans defending a 37-33 majority in the House of Representatives that they won in 2014 for the first time in six decades. Senate Democrats are clinging to a 24-18 advantage and hope to defend it.

Election officials in New Mexico's most populous county reported smooth balloting today, with 30,000 ballots cast as of noon in Bernalillo County. Early voting across the state broke all previous records.

A combative race was underway to fill the state's top oversight post for elections and campaign finance disclosures after former Secretary of State Dianna Duran resigned and pleaded guilty to spending campaign funds on a gambling spree.

Trump insisted New Mexico is within his grasp during a late-October rally at an airport hangar in Albuquerque, highlighting his tax-slashing solutions for a dreary state economy and contrasting local concerns about violent crime with his proposals to wall off the U.S.-Mexico border and turn back Syrian refugees.

But a Trump rally before the primary was marked by street violence and a public feud with GOP Gov. Susana Martinez, the nation's only Latina governor, who has refused to endorse the New York businessman.

Clinton supporters hope registered Democrats in New Mexico — who outnumber registered Republicans 1.5-to-1 — will embrace the former secretary of state and her more progressive proposals as they did with Obama. 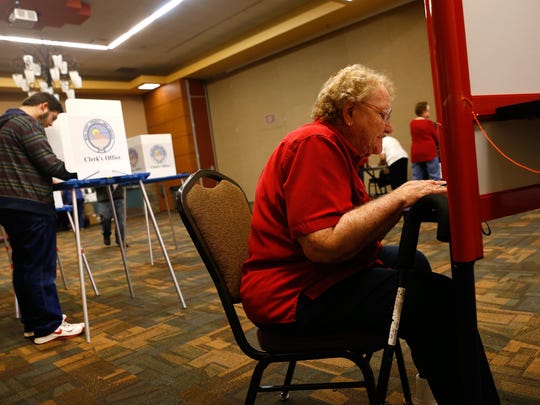 Johnson, meanwhile, has retained avid support for his tirades against government spending and prescient early efforts as governor to decriminalize marijuana.

"He's so honest and he's so forthcoming, probably to a fault," said 49-year-old artist and gallery owner Shavonda Hill of Rio Rancho. "I'm sure that he would be responsible and know enough. He did fine as governor."

Democrats dominate voter registration rolls and cast ballots in disproportionately high numbers, raising their prospects for retaking control of the House and the Secretary of State's Office.

GOP legislative candidates say they are fighting to preserve a business-friendly climate amid an oil bust and state budget deficits, while addressing concerns about violent crime following the killings of two police officers and the gruesome slaying of a 10-year-old Albuquerque girl this year.

Espinoza focused her campaign on concerns of voter fraud and the need for photo identification at polling places, while Toulouse pledged to expand voting opportunities and restore the integrity to the office.

They also will decide whether judges get the authority to deny bail to defendants considered exceptionally dangerous. That proposed constitutional amendment would allow pretrial release to nonthreatening crime suspects who stay in jail because they cannot afford bail.