Beau Biden, the former attorney general of Delaware, was a candidate for governor

Biden had been hospitalized at Walter Reed National Military Medical Center May 19 for treatment of a then-undisclosed illness. The vice president's office said Saturday he had a relapse of a brain cancer first diagnosed and thought cured in 2013.

"The entire Biden family is saddened beyond words," the vice president said in a statement. "Beau embodied my father's saying that a parent knows success when his child turns out better than he did. In the words of the Biden family: Beau Biden was, quite simply, the finest man any of us have ever known."

Biden, a two-term attorney general for the state his father represented in the Senate for 36 years, was a Democratic candidate for governor in 2016.

But he had battled health problems for years, including what was described as a minor stroke in 2010. In 2013, he had a small lesion removed from his brain at the University of Texas MD Anderson Cancer Center. 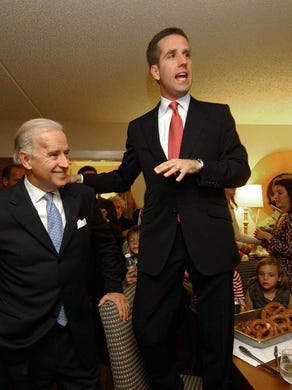 After winning the attorney general race in 2006, Beau Biden makes his acceptance speech with his father, Joe Biden, in his room at a Wilmington hotel on Nov. 7, 2006. The News Journal/Fred Comegys
Fullscreen

With his wife Hallie by his side, Beau Biden rests his right hand on the family's 1893 Holy Bible as he's sworn in as Delaware's Attorney General by Chief Justice Myron T. Steele on Jan. 2, 2007. The News Journal/Suchat Pederson
Fullscreen

Beau Biden and son Hunter, 2, walk outside St. Joseph on the Brandywine on Aug. 24, 2008. The News Journal/FRED COMEGYS
Fullscreen

Attorney General Beau Biden chats with Congressman Mike Castle at a volleyball benefit between Democrats and Republicans in 2007. The News Journal/Chuck McGowen
Fullscreen

Attorney General Beau Biden gestures as he talks in his office in Carvel State Building in 2008. The News Journal/FRED COMEGYS
Fullscreen

Beau Biden at a press conference about a patient abuse investigation in 2008. The News Journal/ROBERT CRAIG
Fullscreen

Beau Biden celebrates his re-election at the Democratic Election Night Party at the Doubletree Hotel in downtown Wilmington on Nov. 2, 2010. The News Journal/SUCHAT PEDERSON
Fullscreen 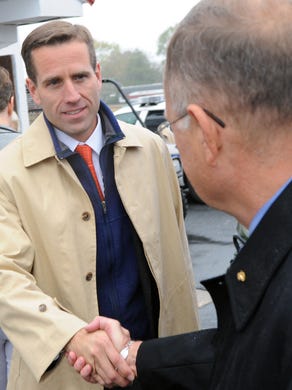 Beau Biden is pictured with his father, Vice President Joe Biden, and his aunt, Valerie Biden, in 2010. The News Journal/FRED COMEGYS
Fullscreen

Attorney General Beau Biden shows sympathy in his keynote speech during a remembrance ceremony for Delaware's Gold Star families at the Delaware Veterans Post Number 1 in in 2009. Special to The News Journal/EMILY VARISCO
Fullscreen

Atty. Gen. Beau Biden discusses the arrest of a Smyrna man on a large list of child pornography charges on Aug. 2, 2010. The News Journal/BOB HERBERT
Fullscreen

Attorney General Cpt. Beau Biden walks down the plane as Gov. Jack Markell prepares to greet him after returning from Iraq in 2009 The News Journal/SUCHAT PEDERSON
Fullscreen

Hunter Biden gets a ride from his dad, Capt. Beau Biden, after ceremony following his unit's return from Iraq in 2009. The News Journal/GARY EMEIGH
Fullscreen

Attorney General Beau Biden before the press conference on a slain officer on Sept. 16, 2011. The News Journal/ROBERT CRAIG
Fullscreen 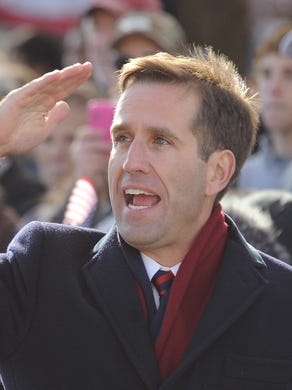 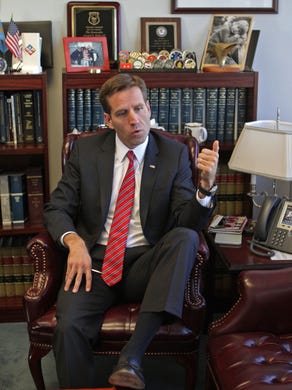 Attorney General Beau Biden announces proposals for a statewide ban on assault-style weapons and a limit on high-capacity magazines on Jan. 14, 2013. The News Journal/JENNIFER CORBETT
Fullscreen

A newly announced presidential candidate, Sen. Joe Biden, is joined by family and supporters on Capitol Hill at a rally on June 8, 1987. AP file
Fullscreen

Attorney General Beau Biden, with his wife, Hallie. Biden underwent a medical procedure in Texas in August and then retreated largely from public view. Twitter
Fullscreen

Beau Biden tweeted with this picture with his family before returning to Delaware from a Texas hospital in August 2013. ?On our way home! Can?t wait to get back. Thank you, Houston,? Beau Biden tweeted just before noon. Twitter Beau Biden Twitter photo
Fullscreen

Beau Biden posted this picture on his personal twitter account Feb. 8, 2014. "Thank you to my wife & kids for the newest addition (& biggest birthday surprise) to our family, Liberty (aka Libby)!? Beau Biden Twitter photo
Fullscreen

Beau Biden speaks with the media in Legislative Hall in Dover in 2010. The News Journal/Bob Herbert
Fullscreen

A Legislative Hall viewing service is planned Thursday for Beau Biden, who is shown here walking toward the Sussex County Courthouse for the trial of Dr.Earl Bradley in 2006. Biden died on Saturday after a battle with brain cancer. The News Journal/ANDREW RENNEISEN
Fullscreen

President Obama said he and his family were grieving with the Bidens.

"Beau took after Joe," Obama said in a written statement from the White House Press Office. He studied the law, like his dad, even choosing the same law school. He chased a life of public service, like his dad, serving in Iraq and as Delaware's attorney general. Like his dad, Beau was a good, big-hearted, devoutly Catholic and deeply faithful man, who made a difference in the lives of all he touched – and he lives on in their hearts.

Named after his father, Joseph Robinette "Beau" Biden III was born in Wilmington, Del. in 1969, the oldest son of Joe Biden with his first wife, Neilia Hunter. He was just 3 years old when his father won an improbable victory in a U.S. Senate race in 1972. But the next month he was seriously injured in an auto accident that killed his mother and sister.

Beau Biden graduated from the University of Delaware and, like his father, attended law school at Syracuse University.

He worked in the U.S. Justice Department for nearly a decade before winning election as state attorney general. He served as a major in the Delaware Army National Guard, and spent a year of his first term deployed to Iraq, where he was awarded the Bronze Star.

As attorney general, his focus was on prosecuting child sexual abuse and protecting homeowners from foreclosure.

Biden is survived by his wife, Hallie, and their two children, Natalie and Hunter; his parents, the vice president and Dr. Jill Biden; his brother Hunter Biden, sister-in-law Kathleen, and nieces Naomi, Finnegan, and Maisy; and his sister Ashley Biden and brother-in-law Howard Krein.