New Mexico is confronting a $458 million budget shortfall because of weak prices in the oil and natural gas sectors. 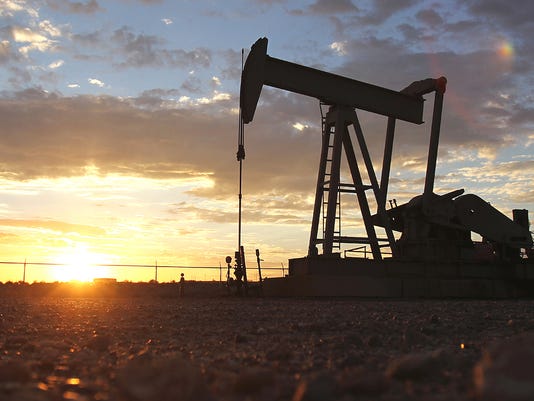 New Mexico is confronting a $458 million budget shortfall this fiscal year because of weak prices in the oil and natural gas sectors and slow growth in other areas of the economy.

State finance and legislative officials have begun compiling a list of incomplete public works projects that might be deauthorized. City governments in oil country, meanwhile, are contending with deficits of their own linked to plunging gross receipts taxes on sales and business services.

Efforts by the state to sweep together idle cash worry Artesia Mayor Phillip Burch. The city in August cut wages by 10 percent for employees, including police and firefighters, to close its own revenue shortfall.

"We don't know what the state may do. They have a lot of leeway," Burch said. "That could mean taking money from municipalities and counties to solve their financial problem rather than looking in their own house at how to solve that."

In New Mexico, the oil and natural gas industry supplies directly and indirectly as much as one-third of the general fund revenue used for public education and other government programs. Dependence on the industry is even more pronounced among city governments such as Artesia and Hobbs in the Permian Basin and Bloomfield, far to the northwest in the San Juan Basin.

City revenue tied closely to gross receipts taxes have plunged as oil and gas producers scaled back operations in response to a sustained downturn in energy prices. In Artesia, that revenue has fallen more than 40 percent from last fiscal year.

“You have those natural gas plants and then you have other smaller industrial firms that provide goods and services to those plants. That can carry over to the retail trade because those people aren't going to have the money to spend on goods and services, so it can just ripple through the regional economy.”

"Nobody has been able to discern where the bottom is going to be," Burch said. "The only reason we're going to be above water this year is because we have a general fund reserve."

In Hobbs, a somewhat larger city of 45,000 where the price of oil is the subject of constant conversation, gross receipts tax money flooded city coffers with $85 million in fiscal year 2014 as crude oil traded at over $100 a barrel and the local economy flourished.

That revenue stream declined to $53 million for the fiscal year ending in June. Hobbs is counting on just $40 million during the current budget year, city finance director Toby Spears said.

The city socked away cash during recent boom years and expects to end the fiscal year with money to spare an extra $26 million, or 34 percent of annual general fund expenses.

"If this is a long-term thing, three, four years from now there probably have to be some changes," Spears said.

With little in the way of reserves to fall back on, Bloomfield has cut salaries for city workers, increased employee health insurance premiums, stopped hiring seasonal workers at public parks and scaled back the hours at a city pool.

"You have those natural gas plants and then you have other smaller industrial firms that provide goods and services to those plants," he said. "That can carry over to the retail trade because those people aren't going to have the money to spend on goods and services, so it can just ripple through the regional economy."