A proposal to establish an ethics commission in New Mexico has been approved by the state House of Representatives. 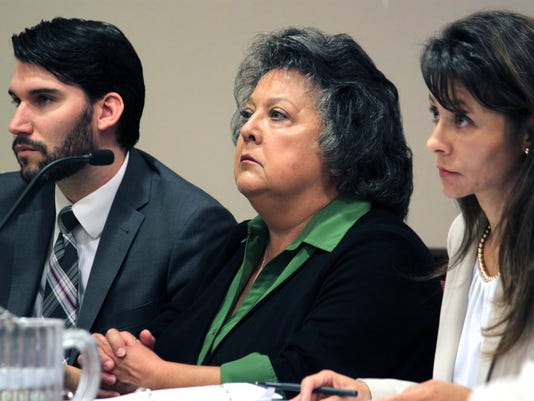 SANTA FE – While supporters of a proposed constitutional amendment to establish a statewide ethics commission celebrated House passage by a lopsided, bipartisan vote, the measure on Wednesday was placed in the hands of a New Mexico Senate that in the past decade has been far less receptive to the idea of establishing an office dedicated to investigating state officials.

House Joint Resolution 5, sponsored by Rep. Jim Dines, R-Albuquerque, cleared the House by a 50-10 vote. This is the furthest that ethics commission legislation has gone in years.

Officials with New Mexico Common Cause, a government watchdog group that for years has pushed the idea for a state ethics office, were happy Wednesday after Senate leadership assigned the resolution to only two committees: the Senate Rules Committee and the Senate Judiciary Committee.

Senate Majority Leader Michael Sanchez, D-Belen, was poker faced Wednesday when asked about the measure. "I haven't seen it yet," he told The New Mexican. While declining to predict whether it would pass, Sanchez said he doesn't know of any opposition to Dines' bill. "At least not yet," Sanchez said.

If it does pass the Senate, the issue would be placed on the November general election ballot.

The commission, as envisioned in the legislation, could initiate complaints and investigate complaints of wrongdoing by state officials. It would have subpoena power.

The body would have nine members — three appointed by the governor, four by legislative leaders and two by the chief justice of the state Supreme Court. No more than four members of the same political party would be allowed. The members would serve in staggered four-year terms.

Members of both parties have tried for at least a decade — beginning when a sitting state treasurer and his predecessor were indicted and eventually convicted in federal court for their part in a kickback scandal — to set up an ethics commission.

This year the impetus was the guilty plea of former Secretary of State Dianna Duran, whose office was in charge of overseeing state campaign laws, to two felony counts of fraud as a result of an investigation by the state Attorney General's Office.

According to the New Mexico Legislature's website, more than 30 pieces of legislation calling for an ethics commission have been introduced in the past decade.

In 2009 the House passed an ethics commission bill late in the session, but it died without a committee hearing in the Senate.

The next year, a Senate bill to establish an ethics commission made it through two committees. However, that bill had provisions that caused longtime ethics commission advocates like Common Cause and the New Mexico Foundation for Open Government to oppose it.

That bill, sponsored by Sen. Linda Lopez, D-Albuquerque, included a confidentiality clause in which a complainant could face a $25,000 civil fine, meaning the complainant could face worse penalties than a corrupt official. Another section of the bill that said the ethics commission couldn't act on any complaint during election season — which runs from the primary filing day in March of an election year until the November general election.

During debate on Dine's proposed amendment Tuesday, several Democrats in the House praised the measure. The toughest questions came from Dines' fellow Republicans.

House Appropriations and Finance Committee Chairman Larry Larrañaga, R-Albuquerque, asked whether a full-time commission and full-time director are necessary. Dines said such questions would be settled by enabling legislation next year if voters approve the amendment.

A financial analysis by the Secretary of State's Office estimates that startup costs for a commission would be $1.28 million. But some of those expenses could be offset because the commission would take over certain duties now assigned to the secretary of state — such as investigating complaints about campaign finance violations.