Thousands lined the streets of Albuquerque as law enforcement officers guided a funeral procession for a slain officer. 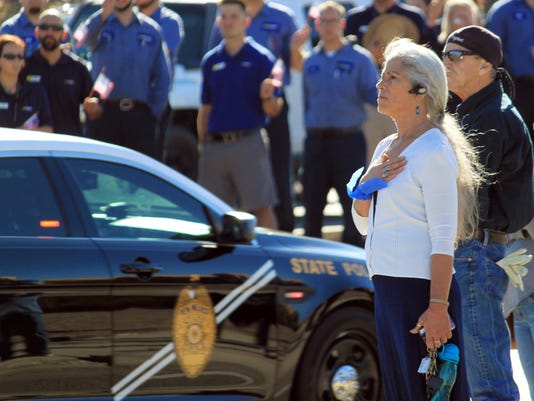 Kathleen Oweegon, of Albuquerque, puts her hand over her heart as the funeral procession of slain Albuquerque Police Officer Daniel Webster passes in Albuquerque on Tuesday.(Photo: Susan Montoya Bryan/AP)

ALBUQUERQUE — Thousands of people lined the streets of Albuquerque on Tuesday afternoon as law enforcement officers guided the funeral procession for a slain police officer.

People stood with their hands on their hearts as many held American flags while the procession for Officer Daniel Webster passed through the city. Others were dressed in blue as the sirens blew.

Several people held signs of support saying they stood “behind the blue line.”

Webster, who was 47, died Thursday at a hospital from injuries sustained in a shooting a little more than a week earlier. Webster stopped a man riding a motorcycle with a stolen license plate when the suspect opened fire and fled, police said.

The long procession moved from the Albuquerque Convention Center to Vista Verde Memorial Park in nearby Rio Rancho, New Mexico, where Webster will be buried.

Authorities say the procession will stop in front of police headquarters for a final dispatch before heading out of Albuquerque.

At a memorial service earlier Tuesday in the convention center, Mayor Richard Berry said the city’s heart is broken over Webster’s death. Berry was among the state and local officials honoring the officer, whose flag-draped coffin sat at the front of the packed auditorium.

The city will never be able to repay Webster or his family for the sacrifice he made in the line of duty, Berry said.

The mayor also said he’s proud of the way the city rallied following Webster’s shooting, showing that Albuquerque is united and cares about its officers. White and blue ribbons were tied around trees, light posts and mailboxes across the city in honor of Webster, a nine-year veteran of the police department. 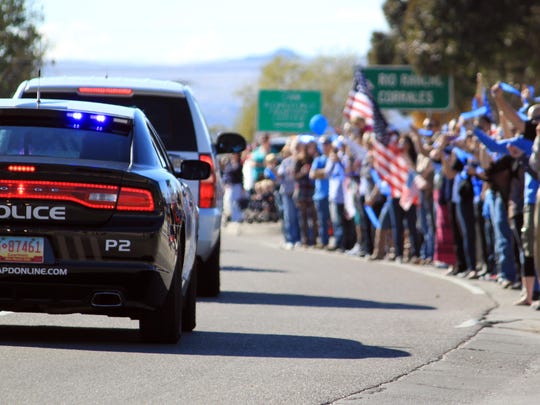 Martinez, a former prosecutor and the daughter and wife of law enforcement officers, said she knows what it’s like to see a loved one walk out the door and hope they make it home safe every day.

She called Webster a superhero, saying he was a leader who always volunteered for high-priority calls. He was willing to put himself in the line of danger, she said.

Webster joined the Albuquerque Police Department after a 20-year military career. He served in the U.S. Army and had been deployed on combat tours to South Africa, Bosnia and Iraq.

In the days since Webster’s death, a makeshift memorial has sprung up at the street corner close to where he was shot, with blue ribbons, flowers and cards posted to a tree. Drawings by a class of second-graders that depicted Webster were placed on the ground near the memorial late last week.