Environmentalists want the court to disqualify PRC members in a case about the fate of the San Juan Generating Station. 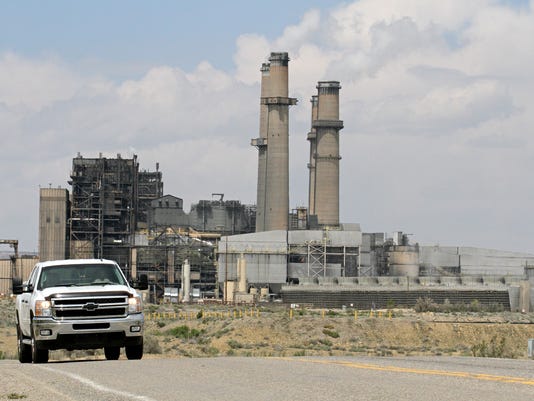 ALBUQUERQUE — Environmentalists asked the New Mexico Supreme Court on Monday to disqualify all but one member of a powerful state regulatory board in a case that will determine the fate of a coal-fired power plant that serves customers throughout the Southwest.

New Energy Economy argued in a 38-page motion that four members of the Public Regulation Commission have created at least an appearance of being biased through their public statements. The group also accused some of the commissioners of being too cozy with Public Service Co. of New Mexico, the utility that operates the power plant.

The commission will vote on a plan that calls for shutting down part of the San Juan Generating Station and replacing the lost power with a mix of coal, nuclear, natural gas and renewable energy. Environmentalists have fought the proposal, saying the utility should adopt more renewable energy sources.

The filing says one commissioner attended a VIP tour of an Arizona nuclear power plant with PNM executives in June. It also says another commissioner requested a campaign donation from the utility's political action committee for the Democratic nominee for state treasurer last year.

The motion targets Commission Chairwoman Karen Montoya and Commissioners Patrick Lyons, Lynda Lovejoy and Sandy Jones. They have rejected the accusations in previous filings and have refused to step down from the case, arguing they have been impartial.

Allowing the commissioners to vote on the plant's future would violate New Energy Economy's rights to a fair and impartial hearing, according to the motion.

"It is not just NEE's interest in fair adjudication of this controversy that is at stake. More important is the public interest that this case not be prejudged and be free of bias," the motion reads.

Environmentalists also have raised questions about PNM's plans to grow its ownership stake in the San Juan Generating Station as other utilities look to divest themselves of the two units that will remain in operation after 2017.

Critics of the plan say PNM will end up exposing ratepayers to future costs and regulations aimed at curbing emissions. However, the utility has long argued that the plan is the most cost-effective for ratepayers and will allow for electricity service to remain reliable.

In August, PNM reached an agreement with the commission's staff, the state attorney general's office and others to settle some of the concerns.

A hearing officer with the commission will hold a meeting regarding the San Juan case Wednesday. Other meetings are scheduled later this month.