FARMINGTON — The Diné College Board of Regents has new representatives for the Northern and Central agencies. 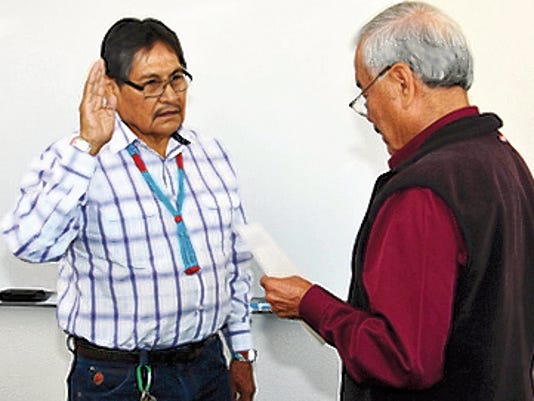 At left, Johnson Dennison, a new member of the Diné College Board of Regents, is sworn into office by Laurence Gishey, the board's president, during a board meeting Friday in Tsaile, Ariz.(Photo: Courtesy of Din&#233; College)

FARMINGTON — The Diné College Board of Regents has new representatives for the Northern and Central agencies.

The Navajo Nation Council's Naa'bik'íyáti' Committee confirmed both new members on Aug. 17, and Navajo Nation President Russell Begaye appointed them to their positions in a letter dated July 23.

Bigman earned a bachelor's degree in biochemistry from the University of New Mexico in 2004 and completed the alternative teacher licensure program at San Juan College in 2010. He worked for four years as a science teacher at Newcomb High School.

Under tribal law, the college's board consists of eight members, including the chairperson of the Health, Education and Human Services Committee, the Navajo Nation Superintendent of Schools and the college's student body president.

In addition to swearing in the two new members on Friday, the board also received reports from the college's administrators and departments and passed funding resolutions for fiscal year 2016, which starts Oct. 1, according to the press release.