Power plant gets another 25 years to operate in Fruitland

FRUITLAND — Government and Arizona Public Service Co. officials gathered under a tent in a parking lot at the...

Power plant gets another 25 years to operate in Fruitland 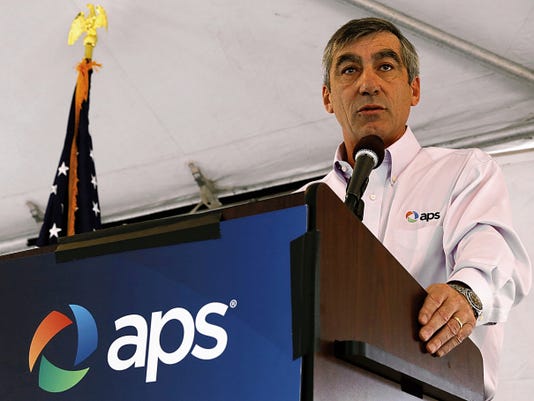 FRUITLAND — Government and Arizona Public Service Co. officials gathered under a tent in a parking lot at the Four Corners Power Plant on Tuesday to celebrate the future of the facility.

Four Corners officials held the event to note an achievement that many described as an against-all-odds feat — final approval of a multi-year power project, including a lease extension approved by the Bureau of Indian Affairs, that gives the coal-fired plant the ability to operate until 2041.

In July, Deputy Secretary of the Interior Mike Connor approved a record of decision that paved the way for the final signature by the BIA this month.

Mark Schiavoni, APS executive vice president and chief operating officer, told more than 300 people gathered on Tuesday that the success of the extension was a result of collaborative efforts of multiple agencies. But he singled out the plant employees for helping the plant continue to operate.

"I can only praise our employees and their steadfastness in sticking to this project. It would have been easy ... to look to other places for employment and walk away from this project ... they stood fast and are why we're here today," Schiavoni said. "We appreciate everything you've contributed and everything you've done to make Four Corners proud and to continue operations. I can tell you today, without that engagement, we wouldn't be having a celebration. We'd be looking at a very different scenario for Four Corners Power Plant.

"I'd also like to say that the hurdles are over, but they're not," Schiavoni said.

Those hurdles, according to David Hansen, APS vice president of fossil generation, include environmental challenges posed by this month's announcement of the Clean Power Plan, which seeks to reduce carbon pollution from power plants to address climate change, by the Obama administration and the Environmental Protection Agency. Coal-fired power plants like Four Corners and the nearby San Juan Generating Station are the largest industrial sources of carbon, a primary component that contributes to global warming.

Plant officials already shut down three units in December 2013. The remaining two stacks, units 4 and 5, are operated by majority owner APS but owned by five companies, with APS owning 63 percent, the Public Service Company of New Mexico with 13 percent, the Salt River Project with 10 percent, Tucson Electric Power with 7 percent and El Paso Electric at 7 percent.

Alton Shepherd, chairman of the resources and development committee with the Navajo Nation Council, said the power plant and the Navajo Mine, which supplies the plant, are a significant source of revenue and income. He said that the plant and mine combine to generate a $213 million impact each year, which includes $95 million in payroll, $54 million in vendor pay, $56 million in royalties, taxes and fees to the Navajo Nation, and $8 million to federal, state and local taxes.

"As we look forward, these are some of the fruits of our labors that we have come to and are going to see within the next 25 years," Shepherd said.

Sharon Pinto, regional director of the BIA's Navajo Regional Office in Gallup, said the plant and coal mine preserve the cultural identity of the people.

"Here we are now, and the future has certainly been stabilized. There has been some sense of security brought to the employees here," Pinto said. "In the spirit of Indian self-determination ... that is why we have put all of our energy and efforts into moving forward with the (record of) decision and renewing this lease to create those opportunities ... it's about cultural preservation. It's about Indian preference and promoting that opportunity for Indian communities."

She pondered the next chapter at the plant as it looks to other means of power generation after 2041.

The station is cooled by water from Morgan Lake, which is man made and is fed by the San Juan River. The plant burns sub-bituminous coal supplied by the nearby Navajo Mine.

Plant workers Wilson Ockerman and Ray Jim sat together and ate lunch after the morning ceremony. The men have worked at the plant for a combined 72 years.

Jim said his work there, recently in the planning division, has been the best job he has ever had. With the lease extension, he believes he will be able to retire there.

"This means a lot to all of us," Jim said. "When uncertainty came, it was difficult. Right now, we're feeling like we're back and can work all the way on projects like new SCR, the pollution controls. Now we can really work. It feels good to us."

Ockerman said the new lease on life at the plant is a result of the surrounding community.

"For San Juan County, this is a life saver," Ockerman said. "That shows what kind of community we have."

James Fenton is the business editor of The Daily Times. He can be reached at 505-564-4621 and jfenton@daily-times.com. Follow him @fentondt on Twitter.