Tribe's Office of Hearings and Appeals sets hearing for next week

Tribe's Office of Hearings and Appeals sets hearing for next week 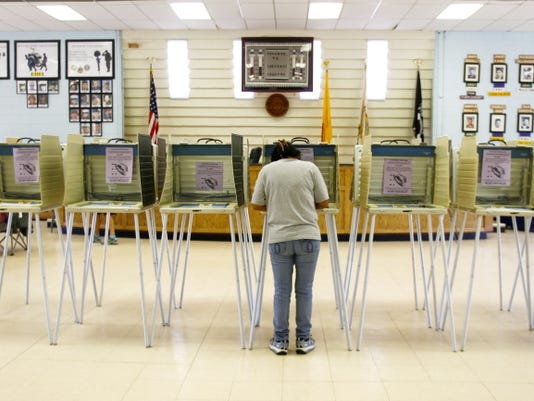 Carolyn Yazzie fills in her ballot July 21 at the Shiprock Chapter House during the Navajo Nation's referendum election to decide the language qualifications for future leaders.(Photo: Daily Times file photo)

FARMINGTON — Navajo officials have delayed certifying the results of last month's language fluency referendum election after a complaint was filed.

Klagetoh Chapter member LaVerne Joe claims in a grievance filed July 30 with the Office of Hearings and Appeals in Window Rock, Ariz., that polling officials Marilyn Chester, Charlotte Nez and Julia Billie allowed a poster advocating the passage of the referendum inside the chapter house in Arizona during the July 21 election.

The referendum allowed voters to decide whether to amend the language qualifications for the tribal president and vice president so a candidate's ability to speak and understand Navajo and English would be determined by voters when they cast ballots. Unofficial results show that the referendum passed.

In addition to the poster, Joe alleges a flier in favor of passing the referendum was also posted on the chapter house door, and a non-chapter member was inside the facility as voting took place.

Joe wrote in the grievance that the actions occurred within 75 feet of where voting was taking place and that they violate the tribe's polling official manual.

When reached for comment on Wednesday, Joe said she filed the complaint because polling officials need to comply with the policies and procedures established by the Navajo Election Administration.

"It was so visible," she said about the poster.

Joe is vice president of Klagetoh Chapter but said she filed the complaint as a chapter member.

Edison Wauneka, executive director of the election administration, could not be reached for comment.

In the Klagetoh Chapter, the unofficial results show that 152 ballots were cast in favor of the referendum and 81 were cast against it.

"I know it won't change the numbers," Joe said of her grievance, but she reiterated that policies and procedures must be followed when conducting an election.

A hearing on the matter is scheduled for 9 a.m. Wednesday at the Office of Hearings and Appeals in Window Rock.

The Navajo Board of Election Supervisors has delayed certifying the election results until the matter is resolved.

The board is scheduled to meet at 9 a.m. today in the business complex at the Quality Inn in Window Rock. A report about the referendum election is listed on the meeting agenda.

In a resolution the board approved May 28, the change in the language qualifications would apply to the 2018 presidential election and subsequent elections.