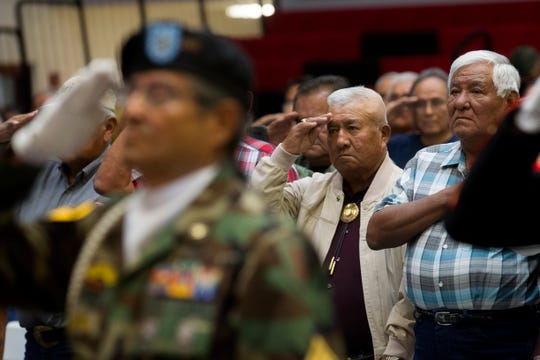 FARMINGTON — Gov. Michelle Lujan Grisham has signed a bill that clears the way for veterans of the Vietnam War to receive high school diplomas.

The veteran must have been honorably discharged and scheduled to graduate after Feb. 28, 1961 and before May 7, 1975.

School boards can start processing and verifying requests for diplomas on July 1.

"I am humbled to sign this legislation today as I reflect on the service so many New Mexicans gave their state and country," Lujan Grisham said in a March 6 press release from her office.

"This is overdue, this is well-deserved, and frankly it's the least we can do. We've got to honor our veterans every way we can, every single day," she said.

While it is unknown how many Vietnam veterans entered military service without graduating high school, the New Mexico Department of Veterans Services stated there are 53,016 veterans in the state who served during the Vietnam War era. 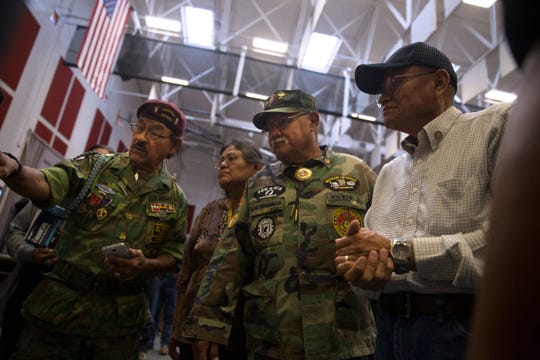 At left, Nelson Joe and Jasper Walker, third from left, look at a map of Vietnam on Sept. 21, 2017 during a Vietnam Veterans Pinning Ceremony at Navajo Technical University in Crownpoint. (Photo: Daily Times file photo)

Muñoz proposed the bill after meeting Coyote Canyon resident Sherylene Yazzie, whose father was drafted into the Army during his senior year at Gallup High School in 1967.

Benny Yazzie, Sherylene's father, never graduated and was inducted into the Army in December 1967. He served until November 1969 then was on reserved status until May 1973, according to his daughter.

Sherylene Yazzie explained that her father does not talk about his military service, so she was unaware about his removal from high school until her paternal grandmother shared the story.

"He should have graduated but because of being drafted months before graduation, he was never able to receive his diploma," Sherylene Yazzie said.

Before reaching out to Muñoz, Yazzie contacted Gallup-McKinley County Schools Superintendent Mike Hyatt about options for getting her father's diploma and was told it required change in state law.

Current state law does authorize school board to issue high school diplomas to veterans of World War II and the Korean conflict.

More than 50 years later, Sherylene Yazzie looks forward to applying for her father to receive his diploma — as well as working with her siblings to plan a reception.

"I would encourage all the veterans to come out. It's their right, they've earned it … they should get their diplomas," she said.

Judy Griego, secretary for the veterans services department, said the agency supported the bill and she was grateful the governor signed it.

"Receiving their high school diploma is something very important to those whose answering of the call for service during the Vietnam War prevented them from graduating with their classmates. Hopefully this new law will finally bring them closure," Griego said.