The cut was unveiled in the fiscal year 2021 budget proposal submitted this month by President Trump to Congress. 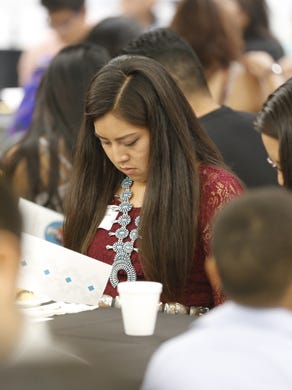 Martha Dailey holds the medal she received as recipient of the Chief Manuelito Scholarship in 1991. Dailey was the keynote speaker at this year's awards ceremony on Friday at the Henderson Fine Arts Center at San Juan College in Farmington. Noel Lyn Smith/The Daily Times
Fullscreen 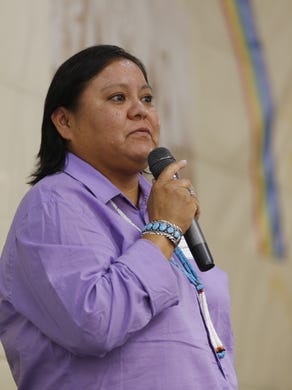 Martha Dailey told students to search for mentors to help with classes during her keynote address at the Chief Manuelito Scholarship awards ceremony on Friday at the Henderson Fine Arts Center at San Juan College in Farmington. Noel Lyn Smith/The Daily Times
Fullscreen

Nazhoona Betsuie, left, and Britany Begaye wait to be recognized for receiving the Chief Manuelito Scholarship during the awards ceremony on Friday at the Henderson Fine Arts Center at San Juan College in Farmington. Noel Lyn Smith/The Daily Times
Fullscreen

FARMINGTON — The Trump administration has proposed eliminating funding for a federal program that provides scholarships for Native American college students.

The cut was unveiled in the fiscal year 2021 budget request submitted this month by President Trump to Congress.

The Navajo Nation government has a contract with the Bureau of Indian Affairs to receive funding from the Higher Education Grant Program for scholarships awarded to undergraduate students.

According to the Navajo Nation Office of Scholarship and Financial Assistance, the funding covered $13.4 million of the $25.3 million awarded to students in 2019.

In addition to the federal dollars in 2019, the office received $10 million from the tribe's general fund, $1.3 million from trust funds and $545,606 from corporate contributions.

"Navajo students already face tremendous challenges when they seek a college degree. Many could not afford a college education without the support provided through the Higher Education Grant Program," Rose Graham, director of the tribe's scholarship office, said in a press release.

Native Americans make up one-third of the student population at San Juan College. 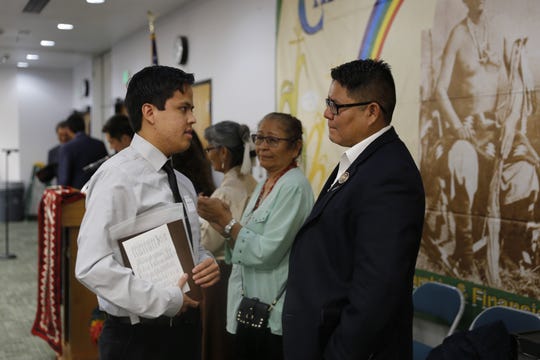 Among the 1,051 community colleges in the United States, San Juan College ranks No. 1 in awarding certificates and No. 2 in bestowing associate degrees to Native American and Indigenous students, said Boomer Appleman, the college's vice president of student services.

"A significant factor of their success is through the use of federal funds allocated to tribal organizations, such as those provided by the Office of Navajo Nation Scholarship and Financial Assistance," Appleman said on Feb. 21.

This is the third year President Trump's budget proposal has zeroed out funding to the Higher Education Grant Program.

Members of Congress thwarted those attempts in the fiscal year budgets for 2019 and 2020.

For fiscal year 2020, Congress appropriated $34.3 million for the program, according to the Bureau of Indian Education.

Representatives from the Navajo Nation did express concern about Trump's proposal when meeting with federal officials this month in Washington, D.C. 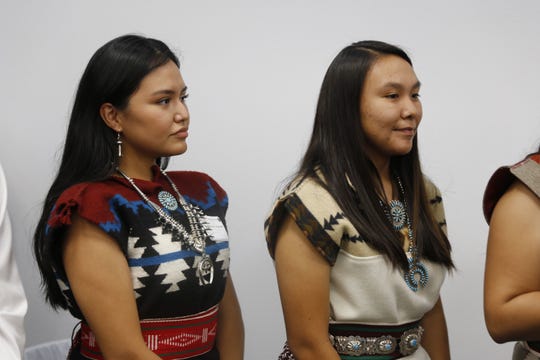 From left, Nazhoona Betsuie and Britany Begaye wait to be recognized for receiving the Chief Manuelito Scholarship during the July 21, 2017 awards ceremony at the Henderson Fine Arts Center at San Juan College in Farmington. (Photo: Daily Times file photo)

Navajo Nation President Jonathan Nez called on Congress to restore the amount in comments made on Feb. 12 to the Subcommittee on Interior, Environment and Related Agencies under the U.S. House of Representatives Committee on Appropriations.

While Nez commended Congress for authorizing an independent budget for the Bureau of Indian Education, he requested $51.5 million to fund scholarships.

"I absolutely disagree with the budget proposal put forth, but the Navajo Nation has tremendous support from House and Senate members who will stand with us to support Navajo students and funding for college," Nez said in the press release from the tribe's scholarship office.