FARMINGTON — President Donald Trump has signed off on a bill to reauthorize and modify a grant program to preserve and maintain Native American languages.

The grant program, operated by the Administration for Native Americans within the U.S. Department of Health and Human Services, provides funding opportunities to assess, plan, develop and implement projects that ensure the survival and continuance of Native languages. 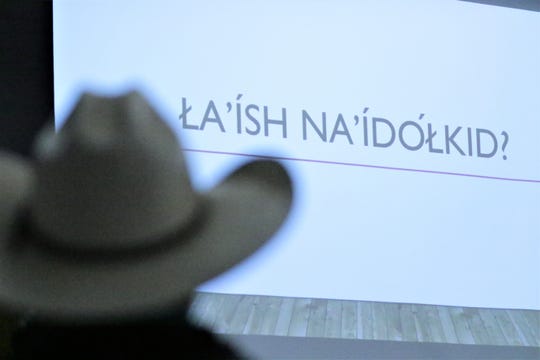 A slide at a presentation about using online tools to teach the Navajo language shown during the Diné Language Teachers Association Conference on Oct. 17, 2019 at San Juan College in Farmington. (Photo: Daily Times file photo)

The bill was introduced by U.S. Sen. Tom Udall, D-N.M., in January and it received bipartisan support in the Senate in June, followed by similar action in the U.S. House of Representatives on Dec. 9.

In June, Navajo Nation President Jonathan Nez and Vice President Myron Lizer issued a letter of support for reauthorizing the legislation to members of Congress, according to their office.

Both leaders commented on Trump's approval the same day it was signed.

"The Navajo language is the foundation of our identity and way of life. As Diné people, it's vital that we preserve it," Nez said.

He added that his grandparents spoke to him in Diné Bizaad to share their teachings, which continue to guide him. 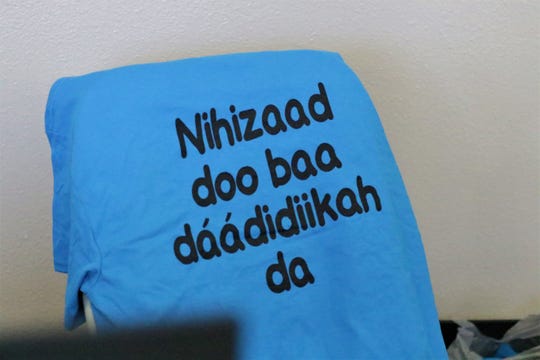 The phrase, "We'll never lose our language," in Navajo appears on the back of a Diné Language Teachers Association T-shirt at the association's conference in Farmington on Oct. 17, 2019. (Photo: Daily Times file photo)

"This, in turn, helped us to grow morally, physically, emotionally and spiritually. With these programs extended through 2024, my hope is that future generations will continue to speak the Navajo language," Nez said.

Udall said he was proud to have championed the bill that recognized Esther Martinez, who advocated for sustaining the Tewa language until her death in 2006.

"When we invest in revitalizing Native languages, we are also investing in rebuilding connections between generations of Native Americans and promoting higher academic achievement outcomes among Native youth. This bill becoming law is an important step forward in the federal government living up to its promise of working with tribes to protect and renew Native languages," Udall said.

Other members of the New Mexico Congressional delegation commented on Trump's action in a joint press release.

"Preserving Native languages is central to maintaining cultural identity. I'm proud to continue honoring Esther Martinez's legacy by ensuring that Native students are connected to their language and that their rich culture and traditions can be handed down to future generations," Democratic Sen. Martin Heinrich said.