The long-serving member of the state senate and Navajo Code Talker died Friday morning in Gallup. 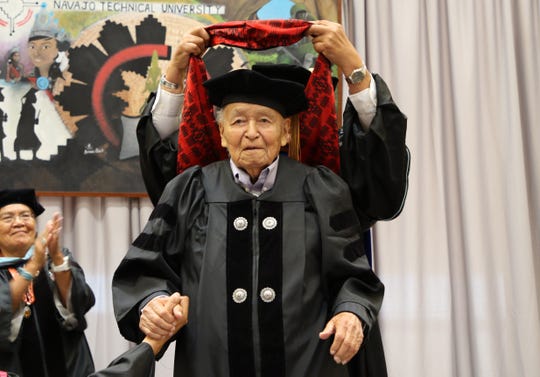 FARMINGTON — New Mexico state Sen. and Navajo Code Talker John Pinto is being remembered for his dedication and service to San Juan and McKinley counties and to the Navajo Nation.

Pinto, 94, died on May 24 in Gallup, according to a press release from the Gallup Police Department.

His family issued a statement Friday afternoon, stating the senator was surrounded by family when he died.

"He worked tirelessly throughout his lifetime to serve the Diné people. The family would like to express their gratitude to his constituents and fellow legislators for allowing him to serve, it is what truly made him happy," the family said.

The New Mexico State Senate Democratic Caucus stated Pinto was the senate's most senior member, with his service beginning in 1977.

"A senator for more than 40 years, he represented his constituents with grace, wisdom and tenacity. Through the relationships he built and respect he earned, he was able to secure innumerable crucial investments for New Mexico communities, in particular Native communities," Gov. Michelle Lujan Grisham said in a statement.

Lujan Grisham, Navajo Nation President Jonathan Nez and Speaker Seth Damon were among officials at the state, tribal and federal levels who reflected on Pinto's dedication to public service.

"Words cannot express the sadness we feel for the loss of a great Diné warrior who served our country as a Navajo Code Talker and in the New Mexico State Senate for many years. He dedicated his life to helping others and he changed the lives of so many people for the better," Nez said in a statement.

Gallup police officers were dispatched at 9:21 a.m. on May 24 to a Gallup address on a report of a male, later identified as Pinto, not breathing, according to the police department release.

Officers initiated CPR before Pinto was transported to Gallup Indian Medical Center, where he was pronounced dead.

Pinto was a Marine Corps veteran and a member of the elite group of Navajo men who used the Navajo language to develop an unbreakable code to transmit military messages in the Pacific Theater during World War II. 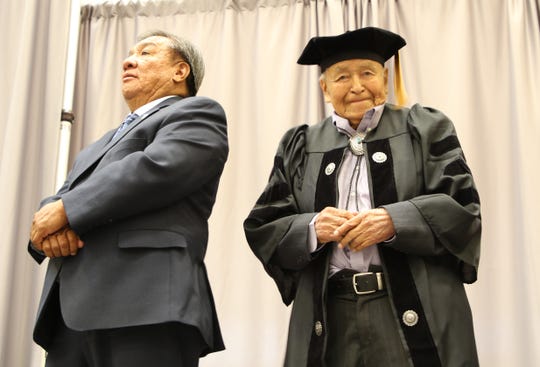 He was among the code talkers who received Congressional Silver Medals in 2001.

Peter MacDonald Sr., president of the Navajo Code Talkers Association and former chairman of the Navajo Nation, said Pinto was one of seven remaining code talkers.

"He was a good friend and a legend for New Mexico," MacDonald said adding the senator was instrumental in bringing process to the Navajo Nation, including funds to widen U.S. Highway 491 from two to four lanes.

The senator also championed for money to construct in Tsé Bonito a museum dedicated to and sharing information about the code talkers.

He supported the project, which received approximately $1 million in this year's Capital Outlay bill.

"We shall never forget about his love for his country," MacDonald said.

In terms of education for Navajo students, Pinto advocated for Capital Outlay initiatives and campus development for Navajo Preparatory School. 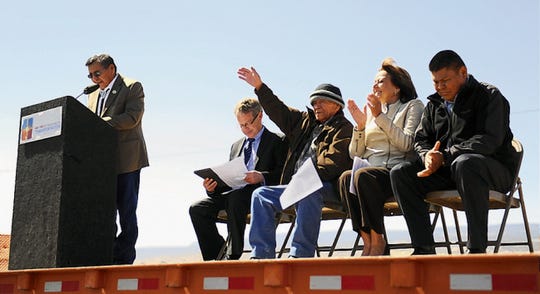 Pinto was born in 1924 and was raised in Lupton, Arizona and in Gallup, according to the State Senate Democratic Caucus.

He earned a bachelor's degree when he was 39 then a master's degree in elementary education from the University of New Mexico.

His career included serving as president of the Gallup Indian community center from 1950 to 1970, working 28 years for Gallup-McKinley County Schools and serving as a legislative liaison for the Navajo Nation Division of Transportation in Window Rock, Arizona.

Before entering the state senate, he was president of Bááháálí Chapter from 1950 to 1954 then secretary-treasurer of Tsé Lichíí Chapter from 1954 to 1960. Both chapters are located south of Gallup.

In 1972, he was elected to the McKinley County Board of Commissioners, where he served four years.

Among Pinto's last public appearances was the May 17 commencement ceremony for Navajo Technical University in Crownpoint, where he was the recipient of the university's first honorary doctoral degree.

"I think you should call me Doctor Senator John Pinto," he said in good humor after receiving his degree.