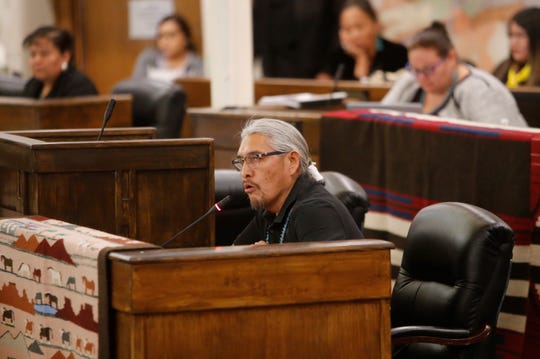 It also seeks to rescind the tribe's energy policy from 2013.

The current policy became law in October 2013 and sets the standard for the exploration, development, sustainable management and use of energy resources on tribal lands, including coal mining and renewable energy development.

If the proposal is enacted, the Navajo Nation Department of Justice would draft a new energy policy.

"The time has come for the Navajo Nation to begin the movement from coal source revenues to more sustainable and renewable energy sources," the bill states.

The bill also calls for creating a task force to provide recommendations for replacing revenues for the tribe considering the closure of the Navajo Generating Station and Kayenta Mine in Arizona.

The coal-fired power plant near Page, Arizona is scheduled to cease operations in December.

The group would also examine the mining and power plant sites for reclamation and re-purposing suggestions.

He informed delegates about the bill during the March 21 debate about separate legislation that proposed the tribe support the Navajo Transitional Energy Company's sole move to acquire the Navajo Generating Station and Kayenta Mine.

Begay's bill is assigned to the Resources and Development Committee, the Naa'bik'íyáti' Committee and the Navajo Nation Council, where final authority rests.

It was introduced on March 21 and will be eligible for considering starting Wednesday.