The new class of U.S. Navy towing, salvage and rescue ships will be named after the Navajo tribe. 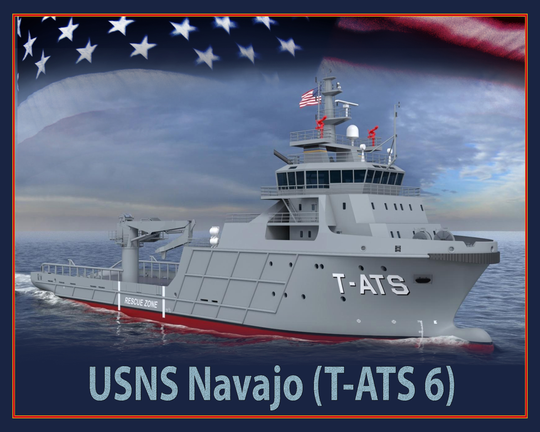 An artist's rendering of the future USNS Navajo (T-TATS 6) shows some of the vessel's details. (Photo: Courtesy of U.S. Navy)

FARMINGTON — A new class of U.S. Navy towing, salvage and rescue ships will be named Navajo in recognition of the tribe and the Diné people.

Secretary of the Navy Richard V. Spencer announced the name today in honor of the contributions the Navajo people have made to U.S. military forces.

"The Navajo people have fought and served our armed forces with honor and valor in nearly every major conflict since the birth of our nation, so it is fitting and right to name a new class of ship in their honor," Spencer said in a Navy press release.

The release states the new class will be based on existing commercial towing offshore vessel designs and will replace the current T-ATF 166 and T-ARS 50 class ships.

The first ship in the class will be named USNA Navajo and designated T-ATS 6, according to the release.

Gulf Island Fabrication Inc. was awarded the $63.5 million contract for design and construction, which will take place at the company's shipyard in Houma, Louisiana. It is scheduled for completion in March 2021.

Former Speaker LoRenzo Bates said in a telephone interview today the proposal to name a vessel after the tribe was started by former Delegate Jonathan Hale during the 22nd tribal council.

When Bates became speaker pro tem in April 2014, his staff started examining initiatives that were shelved, among those was Hale's proposal.

Delegates supported a resolution in November 2014 to have the Navy name the class after the Navajo.

It gained momentum after Bates was elected speaker in January 2015, including tribal lawmakers working with the late U.S. Sen. John McCain, who helped push a measure that contained the name through Congress.

"It was a project that we took on behalf of the nation and the council needed to fulfill. I'm very thankful that it came to reality," Bates said.

"Throughout our history, the Diné people have always been the caretakers and protectors of our land in every branch of the armed services, so we are very grateful that our people are being recognized through this historic announcement from the Navy," Nez said.

"I extend a strong ahéhee' to the efforts of Secretary Spencer and the late Sen. McCain to advance this effort. Our Navajo people, including several council delegates, have a strong tradition of defense of this land," Damon said.