Despite negotiations for NTEC to acquire NGS stopping, the speaker's office held a town hall meeting for tribal members to provide input.

HARDROCK, Ariz. — Community members from chapters located near the Kayenta Mine in northeast Arizona voiced their opinions Friday about a proposal by the Navajo Transitional Energy Company to take over the mine and the Navajo Generating Station.

NTEC had been in discussion with SRP to assume ownership of NGS but talks broke down on Feb. 27 over long-term liabilities, including clean-up for the coal-fired power plant located near Page, Arizona.

SRP stated in a Feb. 28 press release that NTEC was unable to provide "required assurances" sought by the plant's four utility owners and will move forward with plans to close the plant in December. 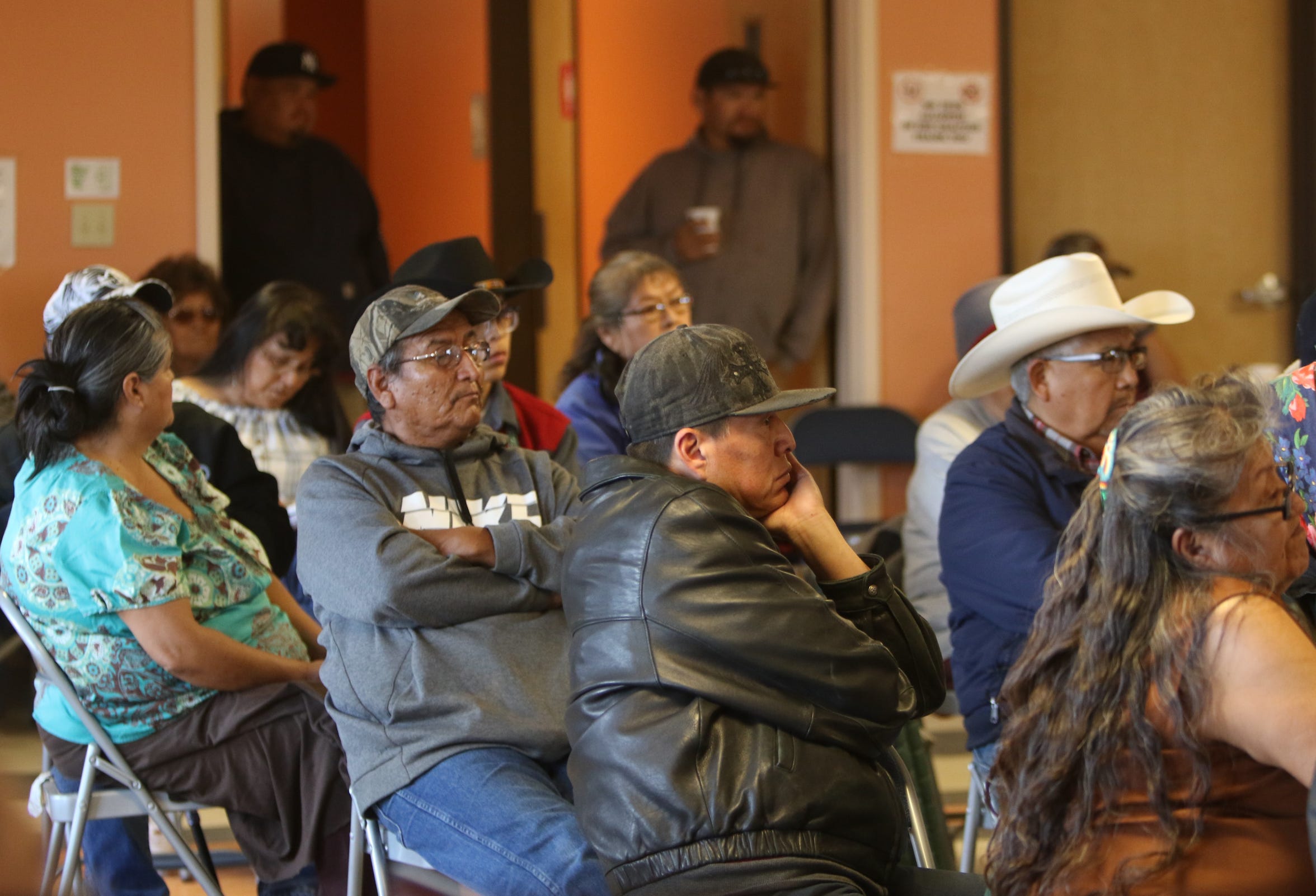 NTEC, a tribal enterprise, has repeatedly stated it remains open to resuming negotiations.

The Office of the Speaker organized the town hall meeting at the Hardrock Chapter house in addition to one in Kayenta, Arizona on Sunday. Work sessions for the tribal council are also scheduled Monday through Wednesday to hear reports by tribal departments and divisions about the acquisition.

Proponents say employment will remain in place at NGS and Kayenta Mine, the Peabody Energy-owned surface mine on Black Mesa that supplies coal to the plant.

Opposing comments included questions about the viability of a coal-fired power plant when federal regulation calls for reducing carbon emissions. 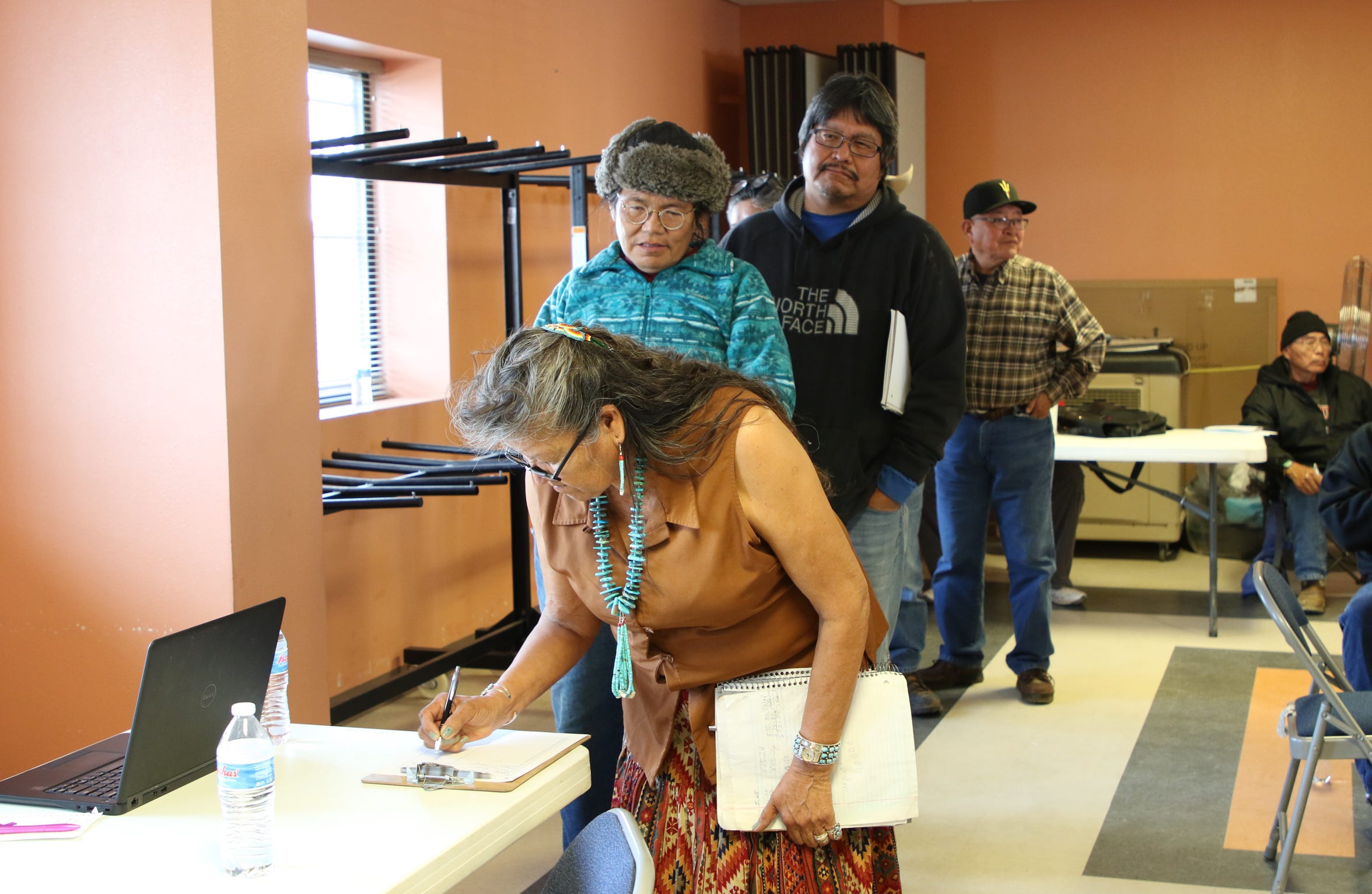 Members of the public sign up to give comments during the town hall meeting on Friday at the Hardrock Chapter house in Hardrock, Ariz.
(Photo: Noel Lyn Smith/The Daily Times)

Marie Gladue, a Big Mountain, Arizona resident, called on the delegates to let the mining operation end because the area and its residents have sacrificed enough to supply coal for the plant to produce energy for cities in the Southwest.

"When we talk about NTEC, NGS (and) Peabody coal, we're talking about protecting what we have as far as the land because we can't eat dollar bills," Gladue said.

Percy Deal, a Big Mountain resident and former council delegate, questioned why the town hall meeting was taking place when dialogue between SRP and NTEC has ceased and SRP continues the decommissioning plan.

MORE: Death of Navajo coal plant deal will have wide-ranging consequences for tribes

"The negotiation is over. It's done. It's over. There's no more meeting. …Don't give false hope to anybody," Deal said.

Curtis Yazzie is a dozer operator for the mine, where he has worked for eight years.

Growing up on Black Mesa, Yazzie used to pretend he was a miner. His income from the mine supports his family, including a son in college and two young daughters.

Yazzie said his family does not want to move from the area if the mine closes.

"I say we give it a chance," he said of the acquisition.

Hardrock resident Bobby Begay will mark 40 years of employment at the mine this year. He said he wants to retire from the operation one day.

"I stand for keeping the mine going," Begay said.

The youngest person to speak was nine-year-old Levi Blackhat, who told the delegates there are ways to produce energy by using solar and wind.

The room where the meeting took place remained full throughout the morning and into the afternoon. By 2 p.m., 47 people had provided comments to the tribal lawmakers. 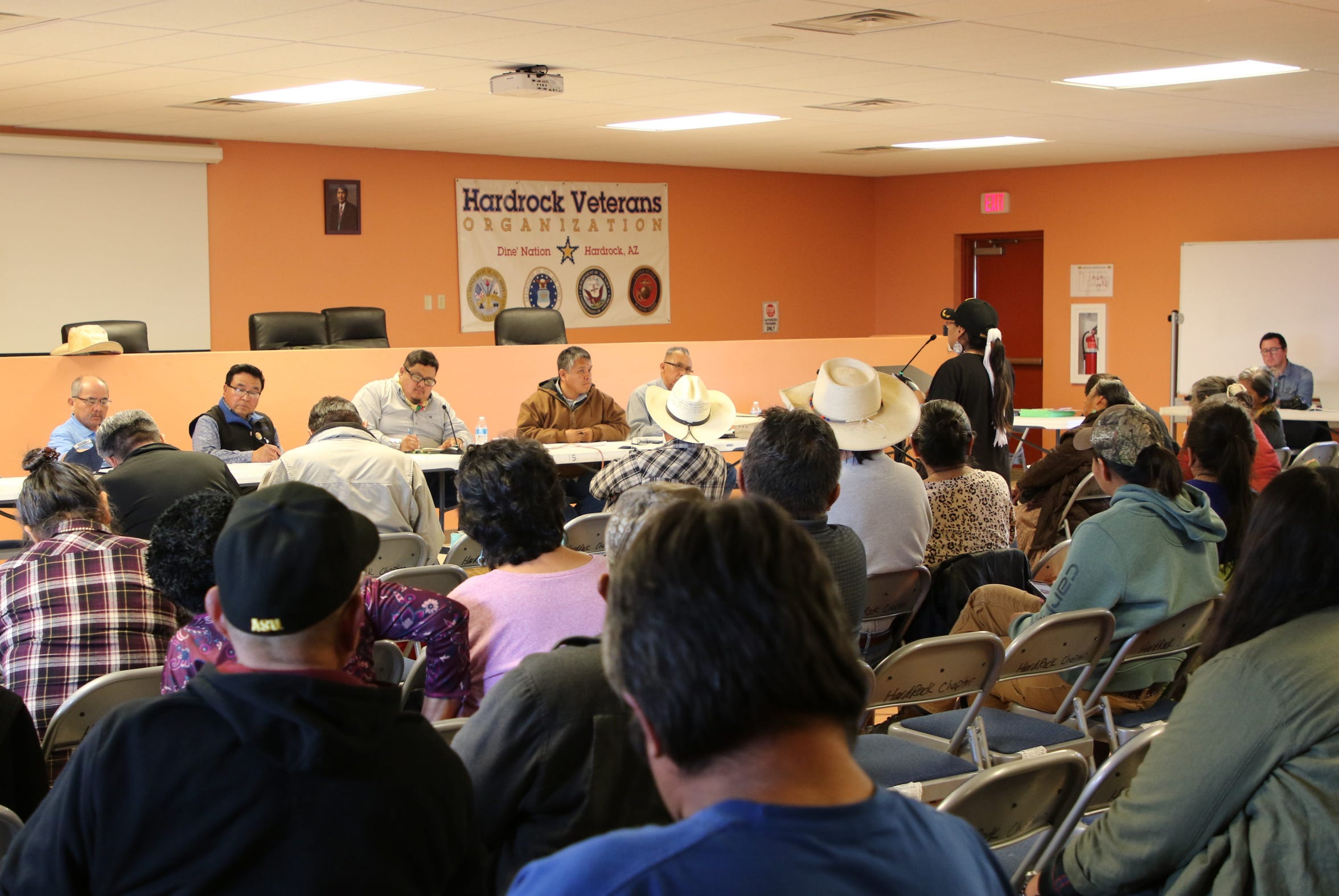 Legislation to support NTEC's independent takeover of the plant and mine was introduced on March 7.

The bill also calls for supporting a statement of policy by the tribe to refuse any financial guarantees, waivers or release of claims to the plant's owners or to NTEC for the acquisition.

NTEC stated support for the measure on Friday in a statement to The Daily Times.

"We hope that the council recognizes that Navajo ownership of NGS will lead the Navajo Nation into a new frontier of economic opportunities from energy development," the company stated.

Coal plant owners, tribe at impasse over takeover of plant

Share
Enjoy a limted number of articles over the next 30 days
Subscribe Today
Log In
Subscribed, but don't have a login?
Activate your digital access.
Join the Conversation
To find out more about Facebook commenting please read the
Conversation Guidelines and FAQs

Despite negotiations for NTEC to acquire NGS stopping, the speaker's office held a town hall meeting for tribal members to provide input.