Pratte served as the campaign manager and is a former executive director for the Navajo Nation Washington Office in Washington, D.C.

Bahe, Woodie-Jackson and Sells also helped the campaign, and each was a staff assistant for Nez in the Navajo Nation Office of the President and Vice President.

Chee is a former Navajo Nation Council delegate who represented the chapters of Leupp, Tsídii To'ii and Tolani Lake in Arizona. Chee has served in other tribal government roles, including work as an executive staff assistant for the president's office and former executive director for the Division of Community Development. 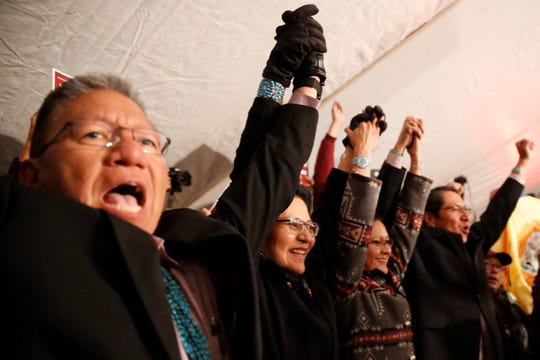 White is a former executive director for the Division of Natural Resources under former President Ben Shelly.

"It is imperative to have a smooth transition of power from one administration to the next to provide the best service to the Navajo people," the announcement states.

Nez and Lizer were elected on Nov. 6, and they will take the oath of office in January.

To thank tribal members for supporting the campaign, the incoming leaders have organized six events in various regions of the Navajo Nation.

The event for the Northern Agency will be held from 5 p.m. to 8 p.m. on Dec. 1 at the Office of Diné Youth in Shiprock, according to a press release.

Previous events were held in Crownpoint, and in St. Michaels and Dilkon, both in Arizona.