In response, Delegates Kee Allen Begay Jr. and Olin Kieyoomia said they will seek to override the president's veto. 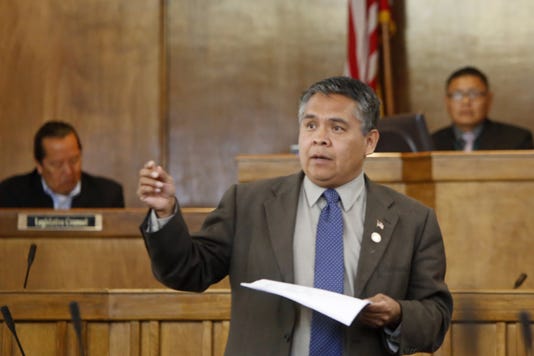 The veterans advisory council was established in 2016 and provides policy advice regarding veterans issues and concerns to the president.

Among the amendments, which were passed by the Navajo Nation Council on Oct. 17, was transforming the veterans advisory council to a veterans board of commissioners, revising its membership and authority and adding legislative oversight by the tribal council's Health, Education and Human Services Committee.

Begaye issued the veto on Nov. 2, along with a memorandum to Speaker LoRenzo Bates and the tribal council that explained the veto.

The president called the resolution "premature" because it was drafted and passed by the tribal council without input from the five agency veterans organizations.

Begaye cited a July 12 resolution from the Eastern Navajo Agency Veterans Organization that opposed the legislation and stated the organization had not received information about the proposal from Delegate Kee Allen Begay Jr., who was the primary sponsor for the bill.

A copy of the organization's resolution was attached to Begaye's veto message, according to a press release from his office.

"The bill is divisive and doesn't represent a unified voice. Instead, it highlights the perspective of two selected veterans organizations while completely dismissing a resolution by Eastern (Navajo) Agency Veterans Organization that states they were not conferred with and adamantly opposes the legislation," Begaye said in the release.

Begaye reiterated a unified voice should be presented by the agency veterans organizations and modifications to the Navajo Nation Veterans Advisory Council be completed with input from those organizations. 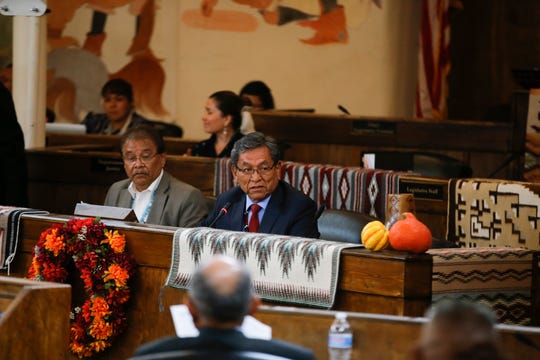 Navajo Nation President Russell Begaye gives his State of the Nation address on Oct. 15 during the first day of the fall session for the Navajo Nation Council meeting at council chambers in Window Rock, Ariz. (Photo: Daily Times file photo)

This task should be accomplished by public forums, the president wrote in his memorandum.

Delegates Begay and Olin Kieyoomia assured veterans they will seek to override the president's veto.

In a Nov. 2 press release from the Office of the Speaker, Begay said the veto denies veterans a stronger role in overseeing recommendations to the president's office on issues such as funding, housing and policies.

The release stated that Begay met with veterans groups and obtained resolutions in support of the bill from the veterans organizations in the Central, Fort Defiance and Northern agencies as well as the Navajo Nation Veterans Advisory Council.

As for the Eastern Navajo Agency Veterans Organization, Begay said he attended their meeting in August but it was adjourned before his presentation about the bill.

Kieyoomia said the veto is another example of President Begaye not supporting veterans.

"It's unfortunate the president of the Navajo Nation continues to deny support for the Navajo veterans' initiatives to self-govern and to have a voice," Kieyoomia said in the release.

Kieyoomia, an Army veteran, was commander of the Fort Defiance Agency Veterans Organization before becoming a member of the tribal council on Oct. 25.