The work to bring the solar project to the family of six was a collaboration between Big Navajo Energy LLC and Tsé Alnaozt'i'í Chapter. 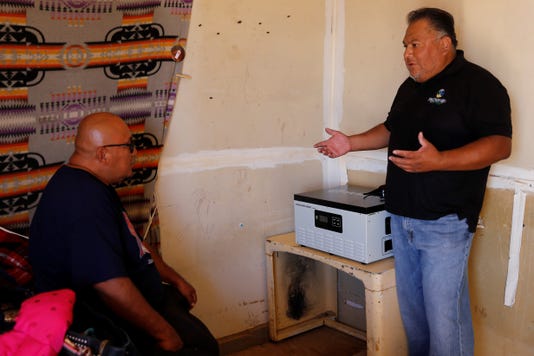 SANOSTEE — Tsé Alnaozt'i'í Chapter member Lorenzo Tahe moved his family eight years ago to the land were he grew up west of U.S. Highway 491.

The family of six lived in a small house with no electricity or running water. To power their few appliances, they ran an extension cord from the nearby home of Tahe's mother and used an ice chest to keep food cold.

The system operates off the grid, and power is stored in a solar generator.

"I love it. The big thing, I would say, is saving money. We don't have to pay for power," Tahe said.

In addition, the family received a refrigerator donated by the Tacitus Ventures Corp.

A few minutes after the refrigerator was plugged in and began humming, Tahe placed his hand on the appliance. 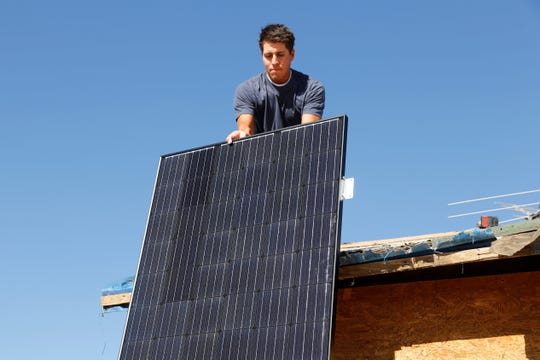 Solar panels are attached to the east and west sides of the roof of the Tahe home on Wednesday in Sanostee. (Photo: Noel Lyn Smith/The Daily Times)

"I can feel it getting cold," he said adding his family now can store milk and juice in the home.

The work to bring a solar project to the Tsé Alnaozt'i'í Chapter started this year but gained momentum when chapter President Frank Smith Jr. started talking with Dory Peters, president of Big Navajo Energy, in June.

Smith understood the benefit of offering solar power to chapter members because the chapter collaborates with the Durango Daybreak Rotary Club on a similar project. 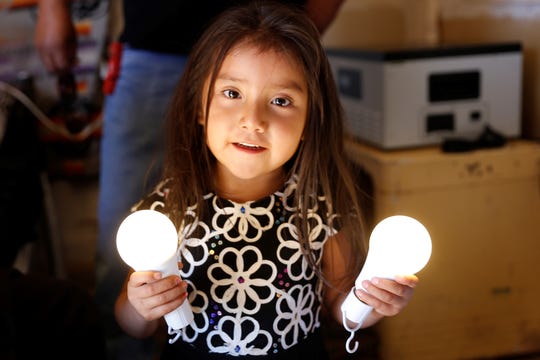 "Even though we're in the 21st century, a lot of these community members are still without electricity. I felt that we do have the need to bring programs like this out here, to provide some type of energy," he said.

Peters started Big Navajo Energy in June 2012 and is originally from Sanostee, where his mother worked as a dorm aide at the local boarding school in the 1960s and 1970s.

"I was passionate to help out my community where I lived," he said adding he grew up with no electricity, and each time he hears the hiss of a kerosene lamp, he thinks of his childhood. 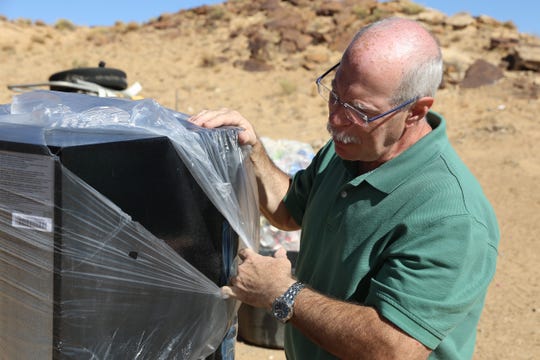 The company has installed off-grid solar systems in homes in the eastern and western parts of the Navajo Nation, but this is its first project in Sanostee.

"My dream is to do what I'm doing now. To be able to provide a solution to the power issues that we have on the reservation," he said.

The company does not manufacture solar equipment, but Peters said he is always on the lookout for the latest technology to share with clients.

Peters said the system installed on Wednesday cost approximately $5,000 and was funded by company profits as part of a commitment to install one free system each quarter. 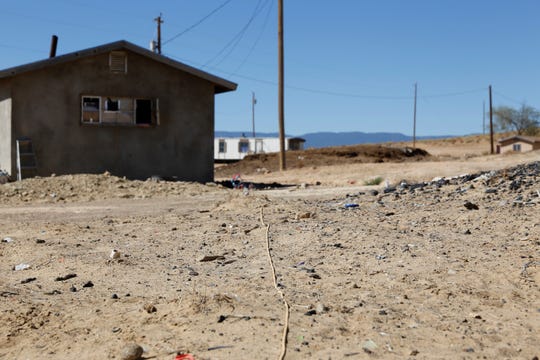 Before their solar power system was installed, the Tahe family ran an extension cord from a nearby house in order to power their appliances. (Photo: Noel Lyn Smith/The Daily Times)

As Alberta Begay, supervisor for the Cove Senior Citizen Center, watched the two solar panels being installed, she said she would like to have a similar partnership for her facility.

"We're interested in it because we have elders in our community that need or have no power," Begay said.