More than 400 Navajo men were recruited by the U.S. Marines during World War II to develop and utilize a code in the Navajo language. 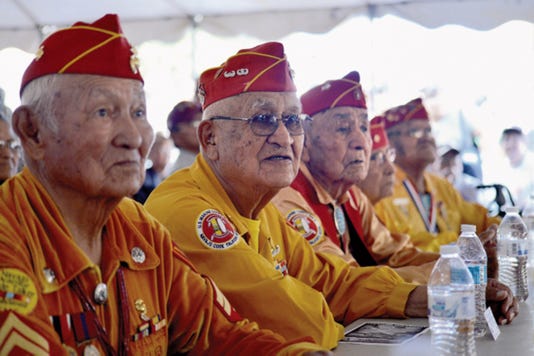 FARMINGTON — The Navajo Nation will recognize the contribution and legacy of the Navajo Code Talkers on Tuesday.

More than 400 Navajo men were recruited by the U.S. Marines during World War II to develop and utilize a code in their native language, which was used to transmit military messages, according to the National Museum of the American Indian.

A public celebration on Tuesday in Window Rock, Arizona, will start with a parade at 9 a.m. The parade begins at the Navajo Nation Fairgrounds and ends at the Veterans Memorial Park, located next to the Window Rock formation.

The event continues with presentations and speeches from guest speakers and a catered luncheon with code talkers and their descendants.

There will be a gourd dance at the park starting at 2 p.m.

A press release from the Navajo Nation Judicial Branch states the first public celebration of the code talkers took place in 2005 and has been held each year since then.

There were 33 code talkers who participated in 2005, and nine code talkers attended last year, the release states.

The proclamation dedicates the day to the men who used the Navajo language in a code that helped achieve victory for Allied forces.

When the tribe established its holiday, it was a paid holiday for tribal employees, but members of the tribal council amended the date as an observed holiday in 2017. The date was restored as a paid holiday last month when council delegates voted 8-6 to rescind the 2017 resolution.

With the date returning to paid holiday status, departments, divisions and offices under the executive, legislative and judicial branches will be closed on Tuesday.

The holiday was restored in order "to honor the valor and invaluable contribution" of the code talkers and "to encourage the participation in related celebrations and memorials," according to the tribal council resolution.

Noel Lyn Smith covers the Navajo Nation for The Daily Times. She can be reached 505-564-4636 or by email at nsmith@daily-times.com.