The demand for arbitration was filed last year by NTEC to the power plant owners in connection to the coal supply agreement. 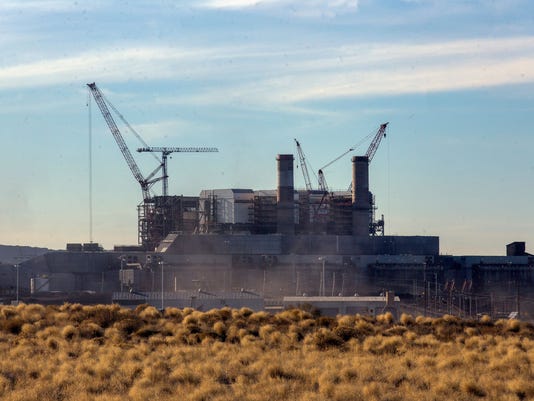 The Navajo Transitional Energy Company has received $45 million to settle a dispute over coal it supplies to the Four Corners Power Plant in Waterflow.(Photo: Daily Times file photo)

FARMINGTON — The Navajo Transitional Energy Company has been awarded a multi-million-dollar settlement to resolve a dispute over coal supplied by the Navajo Mine to the Four Corners Power Plant.

NTEC is the owner of Navajo Mine, which is the sole supplier of coal to the power plant, and an enterprise of the Navajo Nation.

The demand for arbitration was filed June 13, 2017, from NTEC in connection to the coal supply agreement and was handled by the American Arbitration Association.

NTEC alleged that power plant owners the Arizona Public Service Co., the Public Service Company of New Mexico, the Salt River Project, the El Paso Electric Co. and 4C Acquisition LLC relied on an "uncontrollable forces" provision to excuse their failing to accept or pay for the minimum coal tonnage as required under the coal supply agreement.

Uncontrollable forces include instances in which the plant did not operate due to equipment failures and other issues.

NTEC also alleged a shortfall in the coal purchases for the first year of the contract, totaling an approximate amount of $30 million, according to a filing by APS to the U.S. Securities and Exchange Commission.

The minimum tonnage for the power plant is approximately 5.2 million tons per year, according to NTEC.

The settlement was reached last month and resulted in NTEC receiving a cash payment of $45 million, according to the company's release.

In response to follow up questions, NTEC stated the settlement amount was received and used to pay off a term loan and revolver, and to pay royalties to the Navajo Nation.

The parties also amended the coal supply agreement to reduce the coal tonnage to approximately 4.7 million tons each year, according to NTEC.

The amended agreement, which went into effect on July 1, also redefined the uncontrollable forces provision, addressed future deliveries, provided some incentives to the power plant owners regarding pricing and addressed other provisions related to NTEC becoming a partial owner of the power plant.

Last month, NTEC purchased a 7 percent interest in units 4 and 5 of the power plant from 4C Acquisition, an affiliate of APS, as part of the settlement reached in arbitration.

NTEC CEO Clark Moseley said in the company release the settlement was a win-win for the parties, and the power plant remains an important economic engine for the Navajo Nation.

"We are extremely pleased that the parties were able to come together to reach this agreement that provides a path for mutual success," he said in the release.