Comments collected during the listening session will be used to produce a report and list of recommendations for Navajo leaders.

Members and supporters of the LGBTQ community attended the Diné Pride symposium on Friday at the Navajo Division of Transportation in Tsé Bonito.(Photo: Noel Lyn Smith/The Daily Times)Buy Photo

TSÉ BONITO — Members and supporters of the LGBTQ community shared comments about treatment and perception utilized on the Navajo Nation during a listening session here Friday.

The listening session was part of Diné Pride, a two-day event to celebrate Navajo LGBTQ. The session's purpose was to provide the community and their allies and advocates an opportunity to share experiences, observations and recommendations.

The testimony will be used to produce a report and list of recommendations for Navajo leaders, Denetdale said. 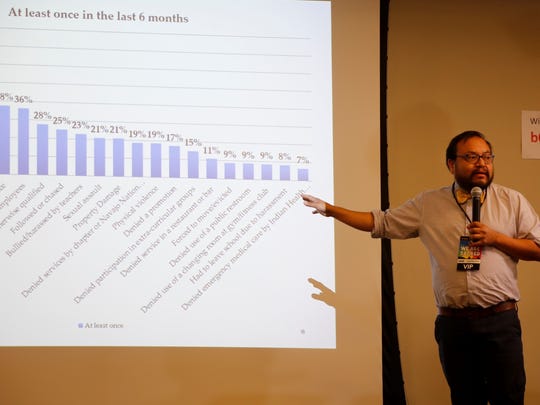 Moroni Benally, moderator for the Diné Pride symposium, talks about the results of a 2015 survey that examined issues the LGBTQ community face on the Navajo Nation. (Photo: Noel Lyn Smith/The Daily Times)

Jerry Archuleta moved to the area from Taos Pueblo in 1994.

It was difficult to come out as gay while growing up, and he did not identify as gay until he was in his 40s, Archuleta said during his testimony.

He added when he first moved here, he lived on the Navajo Nation and faced discrimination because of his sexual orientation and for being a non-Navajo.

His residence was repeatedly burglarized and vandalized and, despite reporting the incidents to the Navajo police, he was told nothing would be done because he was not a tribal member, he said.

"All this just because of what we are, who we are," Archuleta said, adding the treatment caused him and his partner to move to Gallup. 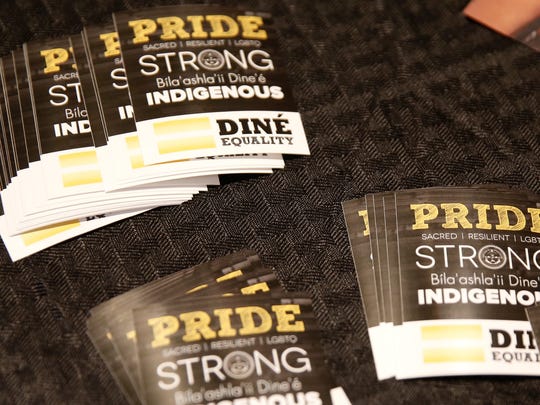 Stickers from the organization, Diné Equality, were available to participants during Diné Pride on Friday at the Division of Navajo Transportation in Tsé Bonito. (Photo: Noel Lyn Smith/The Daily Times)

The treatment of transgender Navajos weighed heavily in comments by Trudie Jackson.

Jackson is transgender and said the non-acceptance of transgenders often extends beyond families and into services provided by tribal government entities.

In her comment, she shared the story of a transgender female who lost her tribal identification number because her identity was not legally recognized.

"To hear a story like that is very heartbreaking," Jackson said adding this type of response causes many transgender Navajos to move to urban areas. 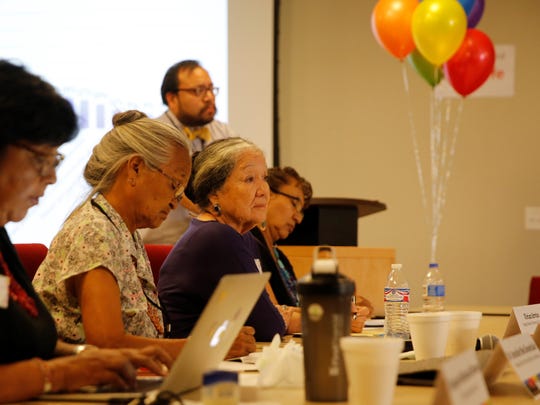 Jackson added she hopes the stories she shared are taken into consideration by tribal leaders.

Kim Wahpepah attended the listening session as part of her advocacy work for the LGBTQ community.

"I walk around spreading awareness for those who don't have a voice," Wahpepah said. 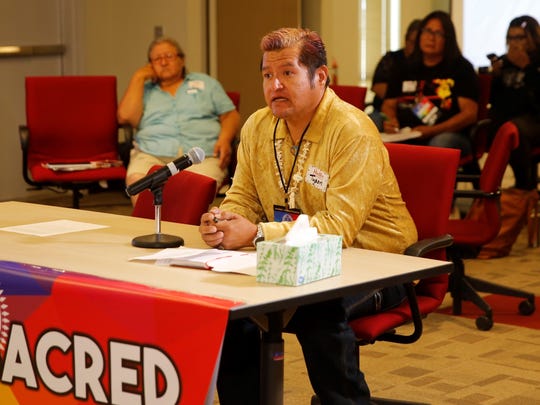 Not all comments focused on the challenges LGBTQ members face on the reservation. Tyson King shared his definition of pride.

"Let us remember to be nice to each other. …Remember pride is not just for the weekend, it should be done all year long," King said. 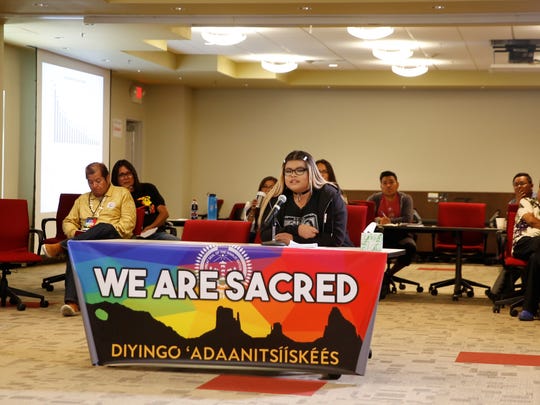 Dianna Mares talks about being a member of the LGBTQ community while attending high school in the Four Corners area during the LGBTQ Community Listening Session at the Diné Pride symposium on Friday in Tsé Bonito. (Photo: Noel Lyn Smith/The Daily Times)