Damage believed to have occurred over New Year's Day weekend 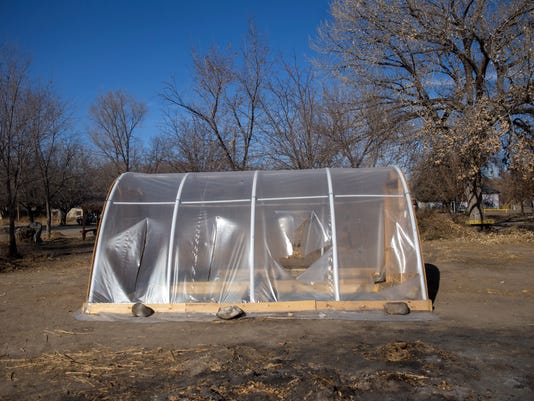 Vandals cut holes in the walls of a greenhouse near the Healing Drop In Center in Shiprock over the New Year's Day weekend.(Photo: Jon Austria/The Daily Times)Buy Photo

SHIPROCK — A greenhouse here designed to shelter a community garden and demonstrate farming techniques was vandalized during the New Year's Day weekend.

The greenhouse, located near the Healing Circle Drop-In Center near the junction of U.S. highways 491 and 64, sustained damages to its plastic, wood paneling and garden boxes.

Shirley Montoya, director of the center, said the damage was noticed on Jan. 1, and it was reported to the Navajo police department here.

Montoya said the structure is part of an initiative started by the nonprofit organization Diné Introspective and others to teach community members about the benefits of producing locally grown food.

Deion Hayes, program assistant for the center and Diné Introspective member, said participants were excited about plans for the greenhouse, including using the space to demonstrate techniques and for hands-on projects.

"It's discouraging," Hayes said about the vandalism.

The greenhouse was funded by a special grant from the U.S. Department of Agriculture's Office of Advocacy and Outreach and administered by Issachar Calling, a a nonprofit organization based in Waterflow that focuses on health promotion and improving the quality of life in communities.

Anna Tyler, administrator for Issacher Calling, said the structure was built as part of an agricultural workshop on Nov. 19 and there were plans to further develop the greenhouse.

Plants saved from a damaged greenhouse sit on a window sill on Thursday at the Healing Drop In Center in Shiprock. (Photo: Jon Austria/The Daily Times)

Hayes said the damage will delay the group's next step to test the soil inside the greenhouse, as well as transplant seedlings some participants had started growing.

Inside the Healing Circle Drop-In Center, Hayes has starter plants for beans, cucumbers, carrots and peppers sitting on a window sill.

Montoya and Hayes expressed interest in rebuilding the structure, including salvaging as much of the existing material as possible.

They are also considering raising funds to install some type of security for the area.