Students in the art class at Newcomb Middle School have been creating Christmas cards for residents at the Chinle Nursing Home in Arizona.

Seventh-grader Destiny Lee finishes her drawing on a Christmas card Wednesday that she made in art class at Newcomb Middle School for a resident of the Chinle (Ariz.) Nursing Home.(Photo: Noel Lyn Smith/The Daily Times)Buy Photo

The card was addressed to Grandma Mary and featured an image of a Christmas tree and two snowmen inside a snow globe.

"When I go somewhere and get gifts for my family, I see these snow globes, and it reminds me (of Christmas)," Henry said.

This month, the art class has been creating Christmas cards for residents at the Chinle Nursing Home in Chinle, Ariz., a community located approximately two hours west of Newcomb. 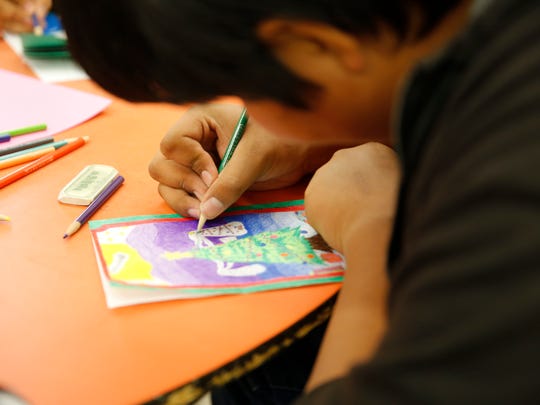 Last month, Templin contacted the nursing home about the project, which he thinks teaches students empathy and serves as a connection been the two generations.

Due to privacy concerns, the facility only released residents' first names, and each one was assigned to a student.

Since students only knew the first names, the cards were addressed to "Grandpa" or "Grandma" followed by the name.

"While we were working on the project, I would remind them that this is going to someone they don't know and they don't know how much this would mean to that person," Templin said. 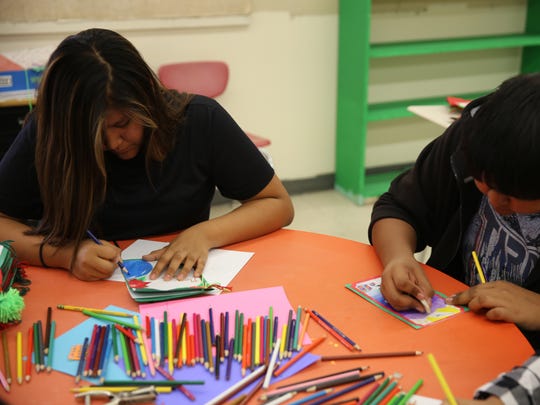 With assorted colored pencils in the center of the table, five students worked on their cards on Wednesday.

"I want to make them feel special," eighth-grader Katie Tsosie said about the project.

Tsosie was assigned a grandmother but decided to make two additional cards in case there were more residents than cards.

The longer the students worked on the project, the more decorative the cards became. Several students included a personal message for the resident to which they were assigned.

"Some of the students were making necklaces and bracelets out of yarn and taping them inside, which I thought was very sweet," Templin said. 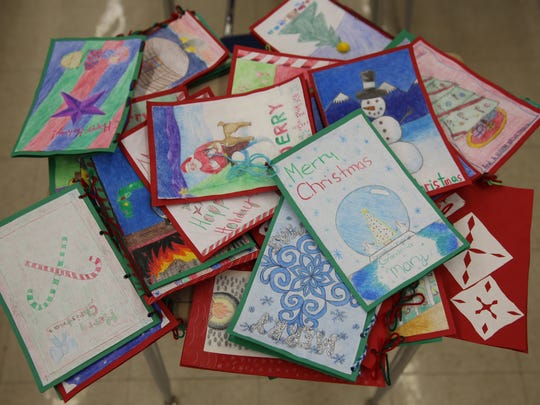 Inside seventh-grader Destiny Lee's card, she wrote about being a student at Newcomb then wished "Grandma Mae" a happy holiday.

Next to her name, she drew a plate of cookies and a glass of milk.

Eighth-grader Alyssa Begay glued snowflakes she cut from construction paper onto her card.

Begay's card was addressed to "Grandpa Fred," and she said she thought about her grandfather while making the card.

She was not alone in thinking about one of her grandparents, as several students said they thought about older family members while working on the project.

Albert Lapahie, an eighth-grader, said despite the distance between Newcomb and Chinle, the cards serve as a link between his classmates and the residents.

"I think it's nice to do something for them," Lapahie said.

Chinle Nursing Home CEO Wayne Claw said on Friday there are 75 residents at the facility, and they come from chapters across the Navajo Nation.

The facility is the only nursing home located on the reservation, and approximately 80 percent of residents do not receive visits from family members, Claw said.

He added those visits, like the Christmas cards, help residents and are welcomed by the nursing home.

"It makes a lot of difference. …They love kids. They get all excited about things like that," Claw said.

Noel Lyn Smith covers the Navajo Nation for The Daily Times. She can be reached at 505-564-4636 and by email at nsmith@daily-times.com.