FARMINGTON — Sunshine Tso's enthusiasm for corn cannot be contained when she talks about the food and its connection to Navajo tradition.

"In Navajo tradition and ceremonies, it's mainly used as healing," the 17-year-old Bloomfield High School student said, adding that corn provides pollen to conduct prayers and is the main ingredient for the cake a Navajo girl cooks for her womanhood ceremony, the kinaaldá.

Preserving that cultural connection and the traditional techniques used to grow corn on tribal lands are among the reasons Tso has continued her participation in the Intertribal Agriculture Council.

The agriculture council was founded in 1987 to promote the conservation, development and use of agricultural resources by Native Americans and Alaska Natives.

Tso was in eighth grade at Dzilth-Na-O-Dith-Hle Community Grant School when she was selected to represent the Navajo Nation at the council's annual conference in 2013.

This week, she will represent the Four Corners area at the council's Southwest Region conference in Albuquerque.

Sunshine Tso has been a member of the Hanaa'dli 4-H Club for nine years. She received first place in 2016 for her 4-H Club projects at the Navajo Nation Fair in Window Rock, Ariz. (Photo: Courtesy of Sunshine Tso)

Her role at the conference will go beyond attendance. Tso has been promoting the event in the area and will help lead a breakout session for young people that focuses on financial loans for livestock and crop production.

Tso will also help council members at Braiding the Sacred, a conference that will center on the traditional aspects of corn and how it is grown on the Navajo Nation.

The conference starts Friday at the Shiprock Chapter house.

Her association with the council led to her attending a leadership summit in July at the University of Arkansas in Fayetteville, Ark. 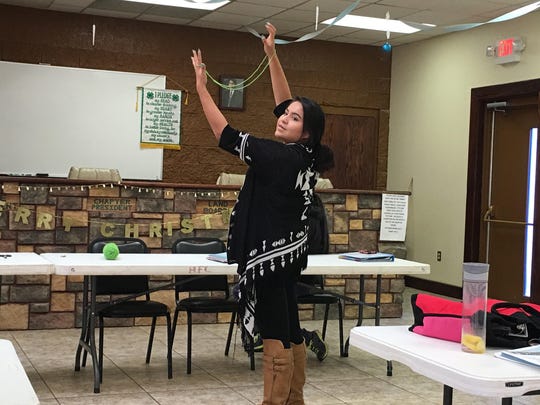 Sunshine Tso gave a presentation about the art and history of Navajo string games during a Hanaa'dli 4-H Club meeting in December 2016. (Photo: Courtesy of Sunshine Tso)

Tso's eyes brightened as she talked about a presentation at the summit by a member of the Hopi Tribe that focused on preserving agriculture through dry farming methods.

"That kind of related to me because my grandparents have a ranch in Arizona, and their tactic there is dryland farming," she said.

Tso is a member of the Hanaa'dli 4-H Club at the Huerfano Chapter and serves as the sergeant-at-arms for the 4-H San Juan County Council.

At school, she is a pitcher for the varsity softball team and a National Honor Society member. She also holds the title of Miss BHS Náshdóílbái, the Navajo word for bobcat.

She is the daughter of Perry and Veronica Tso.

"I fully support her educationally journey. We truly believe in parental involvement to make a child be successful in their education," Veronica Tso said.