Under the proposal, defendants can be criminally charged in tribal court for distributing sexually explicit images without a person's consent. 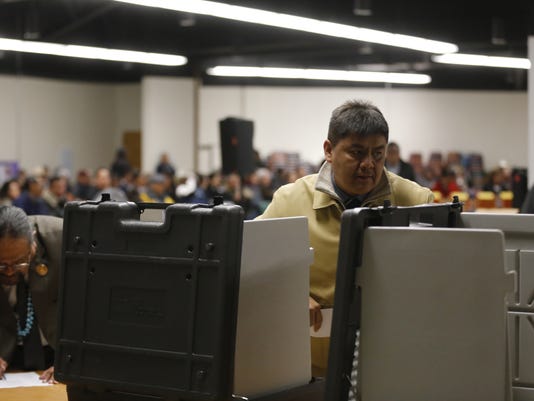 FARMINGTON — A Navajo Nation Council delegate is proposing that the distribution of sexually graphic images without a person's consent be listed as a criminal offense under tribal law.

The bill would make it illegal to electronically share, transmit or post images that depict nudity or specific sexual activities without a person's consent and with the intent to harm, harass, intimidate, threaten or coerce the person.

Delegate Jonathan Hale is sponsoring the bill, which was posted on the tribal council's website and is eligible for consideration by lawmakers starting Monday.

In a telephone interview on Friday, Hale said with more tribal members using electronic devices to communicate, there is a need to develop this type of law to protect victims.

He added he heard a report this year from the Naa'bik'íyáti' Sexual Assault Prevention Subcommittee about a young woman who had explicit images of herself shared on social media without her consent.

The woman sought legal action in tribal court but found out no law existed to address image exploitation, he said.

Under the proposal, defendants can be criminally charged in tribal court and sentencing would depend on details of the case.

Proposed sentencing includes jail time, a fine up to $500 and removal of the distributed images that depict nudity or sexual activities.

The court may also order restitution or nályééh, which would be determined by the Navajo Peacemaking Program.

Nályééh is loosely translated as a mechanism used to restore harmony between parties by talking about the situation to correct the wrong.

Thirty-eight states have enacted laws that address the unauthorized sharing of explicit images, according to the Cyber Civil Rights Initiative.

The Cyber Civil Rights Initiative is a non-profit organization that advocates for the technological, social and legal innovation to fight online abuse.

New Mexico, Arizona and Utah, which the Navajo Nation has boundaries in, are among the states that have such laws.

Hale said the law in Arizona was used as a model for his proposal, which needs approval by the tribal council and the tribal president for enactment.