A portion of the $3.15 million request would be used to demolish a building damaged from a fire on Aug. 16 in Shiprock.

Measure would allocate $3.15 million for facilities

Fire damage is pictured Aug. 17 at a building that once housed the former Boys & Girls Clubs of America in Shiprock.(Photo: Daily Times file photo)

FARMINGTON — A Navajo Nation Council delegate is backing a bill to distribute funding to demolish a former youth center in Shiprock, and start preliminary work for a new judicial and public safety facility.

The bill seeks to allocate $3.15 million from a fund to build court, law enforcement and detention facilities on the Navajo Nation.

A portion of the amount would be used to demolish a building located on the community's north side that has housed numerous events and programs, most notably the Boys & Girls Clubs of America.

The building was damaged by a fire on Aug. 16.

Navajo Nation Fire Chief Larry Chee was unavailable for comment today about the fire investigation because he was helping at the Central Agency Fair in Chinle, Ariz., according to his office.

The Shiprock Chapter issued its support for demolishing the structure and to prepare the site for a new facility in a June 11 resolution that is attached to the bill.

Chee said in a telephone interview today the legislation already was under development before the fire occurred at the building. 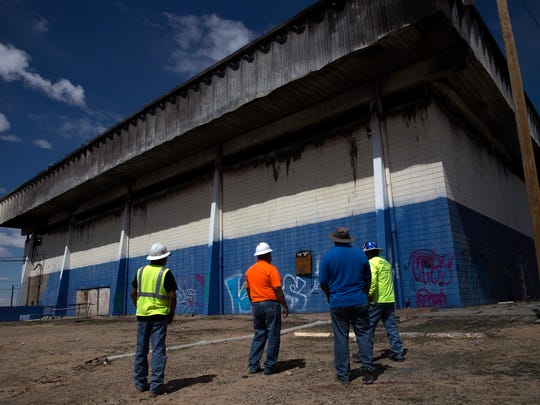 Officials from the Office of Dine Youth and members of the Navajo Nation Safety/Loss Control program inspect a building that once housed the Boys & Girls Clubs of America on Aug. 17 in Shiprock. (Photo: Daily Times file photo)

The idea to build a judicial and public safety facility has been considered by the community for years, but it lacked funding, he said.

"The local community has been trying to put funds together," Chee said.

He added that he understands some community members have fond memories of the building, but he believes it is important to provide an adequate facility for tribal courts and police.

Funding for the Judicial/Public Safety Facilities Fund is generated from a percentage of the tribe's sales tax. An Aug. 8 memorandum by the Office of the Controller states the facilities fund has an unappropriated balance of $13 million.

In June, the Law and Order Committee ranked a new court, law enforcement and detention facility in Shiprock as second on the judicial/public safety facilities priority list for fiscal years 2017 and 2018. The priority list is based on recommendations by the judicial branch and the Division of Public Safety to construct such facilities.

The bill is listed on the proposed agenda for the committee meeting on Monday in Window Rock, Ariz.