The settlement resolves all claims related to the 2012 lawsuit filed by the tribe against the clothing retailer.

FARMINGTON — The Navajo Nation and clothing company Urban Outfitters Inc. have reached a settlement in a lawsuit the tribe filed in 2012.

The settlement, which resolves all claims related to the case, was announced today in a press release by the Navajo Nation Office of the President and Vice President.

While terms of the settlement are confidential, the release stated the parties entered into a supply and license agreement and plan to collaborate on authentic American Indian jewelry in coming years.

Among the items sold in stores and online by the retail outlet were clothing, jewelry, handbags, flasks and underwear.

The parties agreed to dismiss the case with prejudice, meaning it is a final and binding decision and prevents further pursuit of the same matter in court. Each party agreed to pay for their own expenses and attorney fees incurred by the legal action, the court documents state.

"We believe in protecting our nation, our artisans, designs, prayers and way of life," Begaye said in the release. 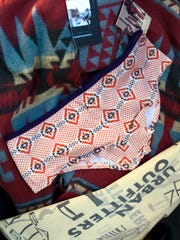 Azeez Hayne, general counsel for Urban Outfitters Inc., said in the release that the company is pleased to reach an agreement. He added that Urban Outfitters takes the rights and protection of artists and designers seriously.

"As a company, Urban Outfitters has long been inspired by the style of Navajo and other American Indian artists and looks forward to the opportunity to work with them on future collaborations," Hayne said.

The Navajo Nation and Urban Outfitters did not response to requests for further comments.

The tribe's complaint argued Urban Outfitters and its subsidiaries, entities and retail brands exercised trademark infringement by labeling items with the Navajo name as well as violating the Indian Arts and Crafts Act.

The tribe sought legal action to protect the use of the Navajo name and trademark, according to the 2012 complaint.

Labeling items as "Navajo" resulted in direct competition with items marketed and sold by the tribe through its tribal enterprises, in addition to deceiving and causing confusion by consumers, the complaint states.