The Navajo Nation filed a response to Sunnyside Gold Corp.'s motion to dismiss its involvement in a lawsuit over the mine spill.

Navajo Nation calls Sunnyside Gold Corp. a "key contributor" to the toxic water buildup at the Gold King Mine

The Animas River flows on Aug. 8, 2015, near its confluence in Farmington with the San Juan River, just days after the Gold King Mine spill released more than 3 million gallons of toxic wastewater into the rivers.(Photo: Daily Times file photo)

FARMINGTON — The Navajo Nation has requested a federal court deny a motion filed last month by a defendant named in the tribe’s lawsuit over the Gold King Mine spill.

In a lawsuit filed earlier this year in U.S. District Court of New Mexico, the tribe named Sunnyside Gold Corp. as a responsible party for the spill on Aug. 5, 2015.

Sunnyside filed a motion on Oct. 17 to dismiss its involvement in the lawsuit, and the tribe filed its response on Monday.

In the tribe’s response to Sunnyside’s motion, it called the company a “key contributor” to the toxic water buildup at the Gold King Mine near Silverton, Colo.

The buildup led to a blowout, triggering the release of more than 3 million gallons of toxic wastewater into the Animas and San Juan rivers.

"It knew that its actions in bulk heading its mine would shift the flow of contaminated water to other mines in the Upper Animas Watershed and pose a substantial threat of a future blowout into downstream communities," the response states. 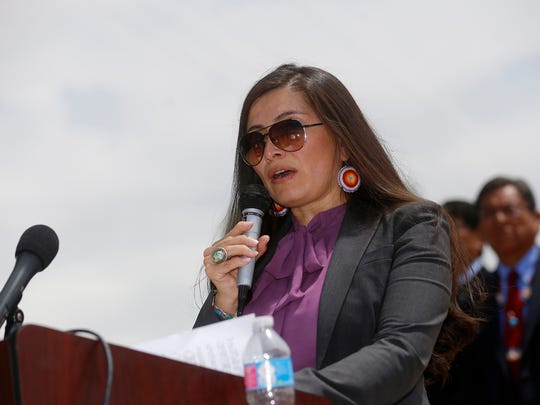 Navajo Nation Attorney General Ethel Branch speaks Aug. 16 during a press conference at Nizhoni Park in Shiprock about a lawsuit the tribe filed in response to the Gold King Mine spill. (Photo: Daily Times file photo)

Throughout the 27-page response, the tribe responses to arguments raised in the motion to dismiss and seeks action by the federal court to deny the motion.

The motion filed by Sunnyside outlined reasons the company should be dropped from the tribe’s lawsuit.

“It knew that its actions in bulk heading its mine would shift the flow of contaminated water to other mines in the Upper Animas Watershed and pose a substantial threat of a future blowout into downstream communities.”

Navajo Nation's response to motion filed by Sunnyside Gold Corp. to dismiss its involvement in the tribe's lawsuit

Sunnyside argued the state of Colorado should be named in the lawsuit since the mine and associated activities at the mine site are within the state.

In the tribe’s response, it stated the federal court can provide "complete relief" for damages incurred as a result of the spill among the defendants already named in the lawsuit. It adds that Colorado's role as a mine regulator is of "no consequence" because the tribe is not challenging how the state regulates mining nor is it asking for an injunction only the state could provide.

Sunnyside also argued for a dismissal using a section of the Comprehensive Environmental Response, Compensation and Liability Act, which is commonly known as the Superfund Act.

The section Sunnyside cited states that no federal court has jurisdiction to review any challenges when remedial action is taking place at a Superfund site.

In response, the tribe argues Sunnyside cannot use that section of the Superfund Act because the Bonita Peak Mining District, which includes the Gold King Mine, was designated a Superfund site only after the mine spill.

The EPA declared the area a Superfund site in September.