The Democratic Party of San Juan County welcomed its location near the Shiprock Chapter house on Friday.

SHIPROCK — The Democratic Party of San Juan County opened its mobile unit here with a celebration and rally today.

Henry Silentman, chairman of the Democratic Party of San Juan County, said the party opened its location because a number of residents wanted a Democratic presence in the community.

"It's great to have a presence in Shiprock again," Silentman said.

The unit, which is an RV decorated with candidate banners, will be parked until Election Day in the Shiprock Chapter house parking lot on U.S. Highway 64.

Silentman said the location does not have set hours, but most likely volunteers will be available from 10 a.m. to 5 p.m. daily to distribute campaign material and voter information.

Today, the unit was situated near the chapter house underneath a group of cottonwood trees, where people gathered to listen to comments from candidates.

The event also provided people with an opportunity to interact with party leaders and elected officials, including U.S. Rep. Michelle Lujan Grisham, D-N.M., as well as an appearance by the Democratic National Committee's Forward Together bus tour.

A spokesman with the national committee said the bus will visit communities across the nation until the general election, and the Shiprock visit was its first stop in a tribal community.

The bus was scheduled to proceed to Tuba City, Ariz., late today.

In comments during the event, Democratic Party of New Mexico Chairwoman Debra Haaland encouraged people to vote. She also highlighted the relationship Democratic presidential candidate Hillary Clinton has with the Navajo people, a connection that dates back to her husband's presidential run.

"Let's show that we value that relationship that we have with President Clinton and Secretary Clinton. Make sure we get out to vote for her," Haaland said.

She added the early voting site at the Shiprock Fire Station opens Saturday.

In an interview after the event, Haaland said the satellite location is important for tribal communities because obtaining transportation can be difficult for some Navajo people. 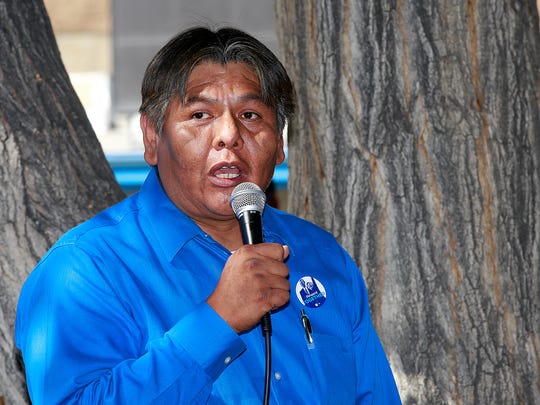 "I know that the Navajo Nation is a huge part of San Juan County, and I applaud the county party's efforts to reach as many as Navajo voters as they possibly can. I think that's so important in this election," Haaland said.

Last month, the San Juan County Republican Party opened a location on the east side of Shiprock.

Sean Sharer, chairman for the party, said the office has been busy, and it is replenishing its stock of items for Republican presidential candidate Donald Trump.

The office is also planning an event for Nov. 4 at the Shiprock Chapter house, he added.

Sharer said it was "great" the Democratic Party opened its Shiprock location because both parties are working to inform voters about candidates and issues, as well as encourage people to vote.