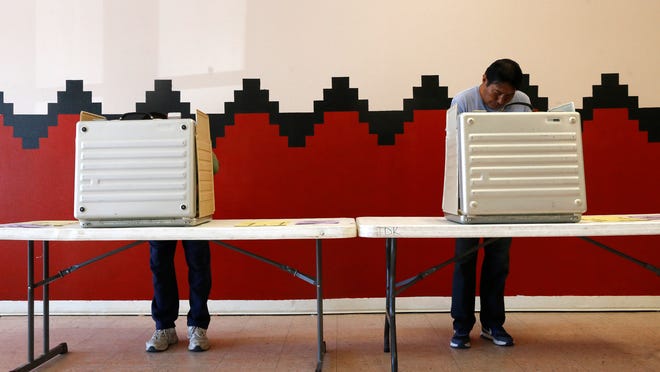 Yazzie, who is the incumbent, faced drew four challengers. The unofficial results show he finished first with 37.8 percent, followed by Smith with 23.4 percent. The top two finishers in the race qualify for the general election in November.

When reached for comment this evening, Yazzie said he made it a point not to campaign because he wanted to see if the chapter membership still has confidence in his leadership.

"I appreciate the people for continuing to have confidence in me," Yazzie said.

In a text message sent to The Daily Times, Smith said, "The people desire to see progress, and the new generation is on the move."

Benally could not be reached for comment this evening.

Edison Wauneka, executive director of the Navajo Election Administration in Window Rock, Ariz., said in an interview after the polls closed at 7 p.m. that there were no problems at any of the 110 chapter precincts.

"I'll be surprised if we get 25 percent," Wauneka said about the nationwide voter participation.

Wauneka said he thinks the low turnout is due to the fact that 80 percent of the 110 chapter ballots have either uncontested races or two candidates for positions, so they automatically qualify the Nov. 8 general election.

A change in local leadership was on the mind of some voters during today’selection.

"I wanted my voice to be heard," Singer said when asked her reason for voting.

Singer was among those who cast a ballot for Smith.

"I wanted someone new with new ideas and a new outlook," Singer said.

She added that her candidates of choice need to look at bring new businesses, and a new economy and jobs to the community.

This was a Kee's first time to vote, and before she cast her ballot, she visited with the candidates at the tents that were set up in the chapter house parking lot.

"I hope whoever I voted for wins. It'll be nice," Kee said about her voting experience.

Marcus Benally was among those who cast a ballot for Donald Benally in the race for Shiprock Chapter president.

"I did the best I could in choosing the candidates we had," Marcus Benally said, adding the future leadership needs to address employment opportunities, crime, drug abuse and domestic violence within the community.

In the Tsé Daa K'aan Chapter, resident Leonard Begay voted because he wants to see change in the community. After years of watching the same individuals being re-elected, Begay said his selection of candidates focused on "a new change."

Hosteen Valencia, 26, said he thinks the candidates he voted for are ones who could address issues facing the community.

"I want to be part of my community," Valencia said.

Results for chapter offices as of 10 p.m. Tuesday