"Finding Nemo" is the second movie dubbed into the Navajo language and will be shown at Animas 10 starting Friday.

Andrew "Boddie" Harvey, the voice of Marlin in the Navajo-language version of "Finding Nemo," poses with his daughter Gianna, who was the voice of one of the baby turtles in the animated film, on Wednesday at the Animas 10 theater.(Photo: Steve Lewis/Daily Times)Buy Photo

WINDOW ROCK, Ariz. – Andrew “Boddie” Harvey is taking his first dip into acting, courtesy of the second movie dubbed into the Navajo language.

The film, “Nemo Há’déést’íí’”, is the Navajo-language version of Disney Pixar’s “Finding Nemo" and is the latest collaboration between the Navajo Nation Museum and a major Hollywood production company.

Harvey, who is originally from Tsaile, Ariz., but resided in Mitten Rock, provided the voice of Marlin, the dedicated clownfish who goes on an ocean adventure in search of his son, Nemo.

In a telephone interview Thursday, Harvey said his whirlwind adventure started in June after auditioning for the role of Bruce, a shark who tries his best to eliminate fish from his diet.

He did not get the part but was called back to read for another character, which, eventually, lead to an impromptu audition for the role of Marlin.

“I never thought I was going to be able to get into the movies with something like this. It’s surprising, and it’s amazing,” Harvey said.

His voice work was completed in July at Igloo Music Studios in Burbank, Calif. 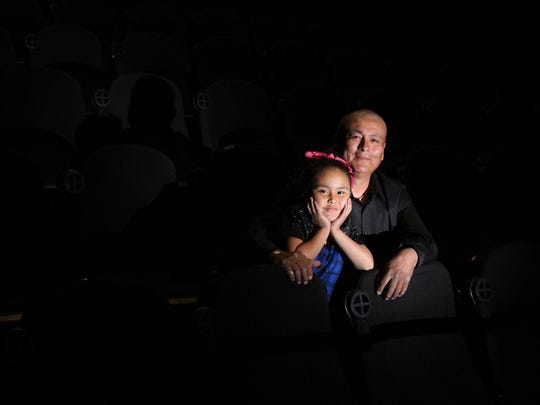 Andrew Harvey and his daughter Gianna both provided voices for the Navajo-language version of "Finding Nemo," which opens this weekend in Farmington. (Photo: Steve Lewis/Daily Times)

Harvey said he traveled to Burbank with his children — sons Iyn Harvey, 17; and Izk Harvey, 16; and daughter Gianna Harvey, 7 — and during their week-long stay, they were treated to a visit to Disneyland.

His daughter has a small role in the film. She voiced one of the sea turtles that swim with Marlin and Dory as they travel on the East Australian Current.

“She was all happy about it,” Harvey said about Gianna's contribution to the film.

The premiere for the cast and crew was March 7 at the Century Rio 24 theater in Albuquerque.

Harvey was accompanied to the event by his children, one of his sisters and his father.

“The movie is really good … it is so awesome,” he said, adding Igloo Music Studios did an outstanding job of dubbing the movie into Navajo.

“It’s amazing what we can do with our language,” Harvey said.

Harvey knows firsthand the movie will appeal to viewers of all ages because his father, Andrew Harvey Sr., who speaks and understands Navajo, enjoyed the film.

“I asked him after the movie, ‘Did you enjoy it?’ He goes, ‘I heard every word clearly. I understand what the movie is about,’” Harvey said.

Sharing that experience is one purpose of the film, Navajo Nation Museum Director Manuelito Wheeler said on Thursday.

Another purpose is to bring attention to the issue of Navajo language preservation because it provides a “middle ground” for fluent Navajo speakers and for those who are learning, Wheeler said.

“There’s tribes that lose their language (every year). The Navajo Nation has plenty of fluent speakers right now, that we need to move on that and utilize our resources while we have them," he said. 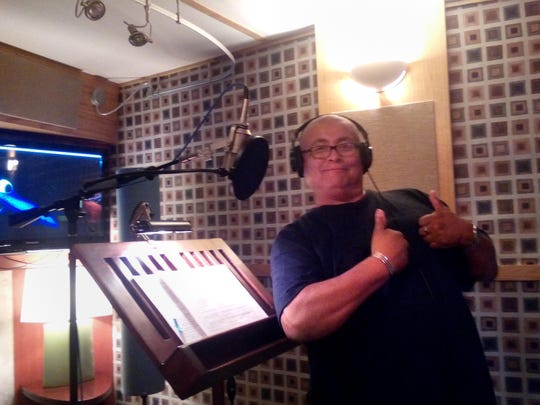 Andrew Harvey says he spent the better part of a week in a Burbank, Calif., sound studio last summer recording the voice of Marlin for the Navajo-language version of "Finding Nemo." (Photo: Photo Courtesy of Andrew Harvey)

Wheeler said the movie not helps document the language, it also creates an environment in which people are comfortable learning Navajo on their own.

In 2013, the museum collaborated with Lucasfilm Ltd. to release "Star Wars" in Navajo. Wheeler said the museum wanted a children's film to be its next collaboration with a studio so it worked with Disney.

It took more than a year to complete “Nemo Há’déést’íí’” and required more than 70 voice actors to fill the movie's dialogue.

“It’s a great story. It’s a story, I think, our Navajo people would really enjoy, and then there's the underlying message of the movie, which says, 'Just keep swimming,’” he said.

For Wheeler, that means not giving up on sharing the Navajo language.

“We’ve done everything in between. We went from the universe to the depths of the ocean. It’s another testimony as to how powerful and beautiful our Navajo language is,” he said.