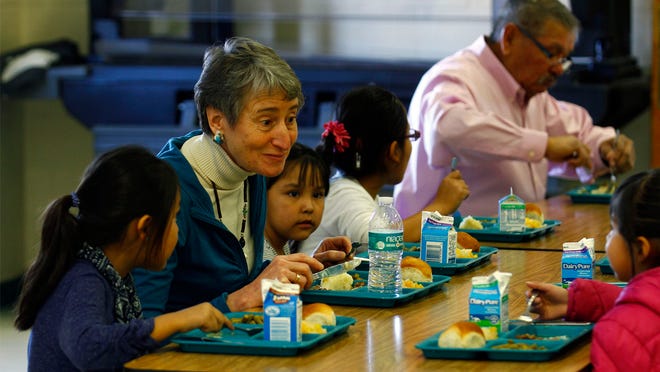 COVE, Ariz. – Interior Secretary Sally Jewell announced on Thursday that Cove Day School is one of two Bureau of Indian Education schools that will receive federal money to overhaul its campus.

Jewell made the announcement after touring the school, which was built in 1959 and now includes several portable classrooms.

Cove Day School and Little Singer Community School near Winslow, Ariz., are the last of 14 BIE schools slated to receive funding for construction based on a list the bureau compiled in 2004.

The Consolidated Appropriations Act for 2016, which became law in December, allocated $45 million for construction costs at the two schools.

Principal Leo Johnson said Cove Day School's new campus will cost an estimated $9.6 million, and construction is set to start in 2017. The existing school building is expected to be demolished and replaced with a new facility, and new staff housing will be constructed.

Johnson shared information about the project, which is currently in the design phase, with Jewell, Assistant Secretary for Indian Affairs Lawrence S. Roberts and BIE Director Charles "Monty" Roessel, who all stopped at the school on Thursday.

School officials hope the new facility will boost enrollment, which decreased for several years but has since rebounded. About a decade ago, enrollment was at 73, Johnson said.  Now, the school serves 38 students from kindergarten through sixth grade.

“I know in talking to the community, in dialogue and consulting with community members, they’re looking forward to this new school,” Johnson said.

Kathleen Tsosie is the Shiprock Agency representative for the school and attended Cove Day School.

“I’m excited. I want to see it,” Tsosie said about the new facility.

During a tour of the existing school on Thursday, Jewell interacted with several students, including one class of six kindergartners and first graders.

“It’s fun to see their work,” Jewell said to Andy Davis Begay, who teaches kindergarten and first grade at the school.

Jewell, who serves as the chairwoman of the White House Council on Native American Affairs, also visited the computer lab and library and heard comments from staff about the need for better electrical and plumbing systems.

In the school kitchen, Jewell talked about meal service with cook Blanche Shorty and about bus transportation with Carol Curley, the school’s only bus driver who drives an average of 120 miles daily in the Cove, Red Valley and Mitten Rock areas.

“I try to do my best to deliver the students,” Curley said to Jewell.

With one bus traveling that many miles, Principal Johnson said the school needs funding for bus maintenance and repairs.

Recent winter storms have dumped more than a foot of snow on Cove, and that means roads are often muddy, Johnson said. He said staff sometimes are forced to use government vehicles to meet parents who live off those roads because the bus cannot reach bus stops.

In a press conference after touring the school, Jewell commended school staff for creating a “comfortable and bright” learning environment.

“We appreciate Secretary Jewell coming out here to Cove and announcing the new school and teacher housing,” Nez said.

The vice president said it was also good for students to meet Roessel, who is an enrolled member of the Navajo Nation.

Crotty told Jewell about a pilot project between the community of Cove and the school to supply fresh fruits and vegetables for school meals. The idea, Crotty explained, is that "local producers can provide healthy, nutritious food, traditional food to students."

On Friday, Jewell will be joined by Bureau of Indian Affairs Director Michael Black and leaders of the Pueblo of Isleta for a signing ceremony to finalize the tribe's land-into-trust application.