Volunteers feed the homeless in Shiprock

Volunteers from two Northern Agency chapters served meals to the homeless in Shiprock on Thursday.

Volunteers feed the homeless in Shiprock

Barber was one of the volunteers from the Red Valley Chapter authorized local emergency response team, which traveled to the event from Arizona.

"I enjoy volunteering. I like to help the community members," Barber said. "I see these people, they're still our people, no matter what."

Barber said there are times when she recognizes individuals from Red Valley living on the streets in Shiprock and Farmington.

"They're still someone's loved one. Someone still has to take care of them. We can't look the other way because they're out there, walking the streets," she said.

Thursday's event was not the only time of the year that Barber volunteers, a service she has been providing for 17 years. She also donates food throughout the year and visits with homeless individuals, to listen to their situations, problems and opinions.

"I don't mind taking my time off from what I'm doing to chat with them," she said.

The group of volunteers was preparing to serve 100 meals in the Shiprock Events Center, also known as the old Napa Auto Parts building, located off U.S. Highway 491.

Barber said the building's owners donated the space, with volunteers setting up tables and chairs.

In addition to a hot meal, there was a table filled with jackets, long-sleeved shirts and sweaters for needy diners. There were also containers holding jeans and other assorted clothing.

Those who arrived early to the dinner browsed among the clothing, donated by a Gainesville, Texas, church, with some finding jackets and hats to wear. Some individuals also picked up packets of hygiene products that were donated by the American Red Cross.

Gerald Henderson, president of the Tsé Alnaozt'i'í Chapter ALERT, said Shiprock was selected because of its location in the Northern Agency, and its population has members from a number of Northern Agency chapters.

"All these people that are here, that are homeless, they're all from different directions," Henderson said.

He added that some have been "traumatized" by situations such as domestic violence or substance abuse, and they need to know there are people who care.

"A lot of them are pushed away from home. They're scared to go home. …We're second family to them," he said.

Organizers said another goal of the event is to demonstrate to chapters the benefits of working together to address the issue of homelessness.

Last year, meals were distributed from the north parking lot of the Navajo Nation Shopping Center plaza. Henderson said it was relocated to the Shiprock Events Center because the building provides a warm and safe place for people to enjoy their food.

Beronica Barber, secretary and treasurer of the Tsé Alnaozt’i’í Chapter ALERT, stood next to a stack of foam plates, and cases of bottled water and soda.

"Hopefully, they will want to come in and have a warm place to eat," she said. 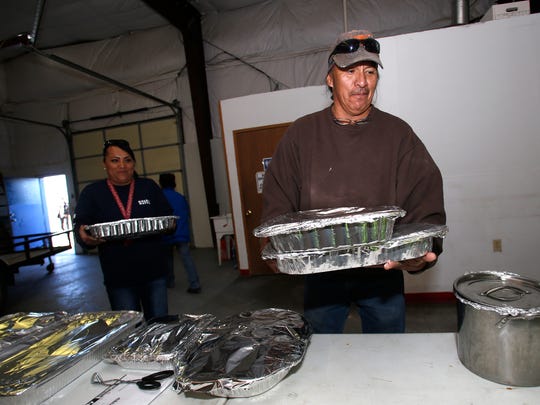 If people did not want to visit the building, volunteers were prepared to deliver a meal to their location, she said.