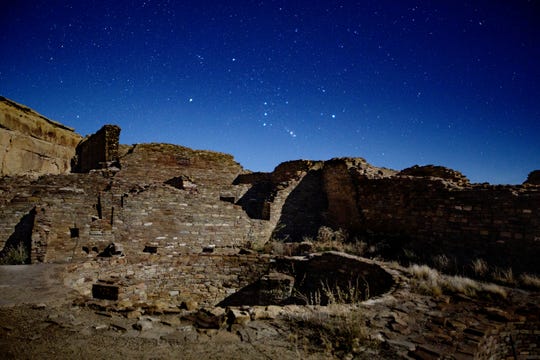 FARMINGTON — As a kid growing up in San Diego, and later as an adult living near Washington, D.C., and in the rural South, Nathan Hatfield has been able to view the night sky from a variety of settings — most of them pretty routine.

Each of those locations yielded essentially the same experience, he said. He could certainly see the moon, a spray of stars and maybe even a planet or two. But even living in a country setting in the South, away from the bright lights of a big city, the night sky was nothing special.

That changed in September 2015 when Hatfield arrived at Chaco Culture National Historic Park to serve as the chief of interpretation. As an officially designated International Dark Sky Park, Chaco Canyon offers one of the more remarkable night-sky viewing experiences in the continental United States, something that Hatfield said came as a revelation to him when he gazed up at the Milky Way that first night.

"It was mind blowing," he said, recalling his reaction.

That feature of Chaco will be emphasized this weekend when the park's fourth annual Astronomy Festival is held. Daytime and nighttime activities are planned Sept. 20-22, culminating with a celebration of the autumnal equinox at dawn on Sept. 23.

Hatfield hopes everyone who attends the festival has the same reaction he did when he came to Chaco and realized the park's attractions only begin with its famed Anasazi ruins. It can be difficult for the uninitiated to understand how meaningful it is to see the heavens in a setting almost devoid of artificial light, and Hatfield said it may be one of those things you just have to see to believe. 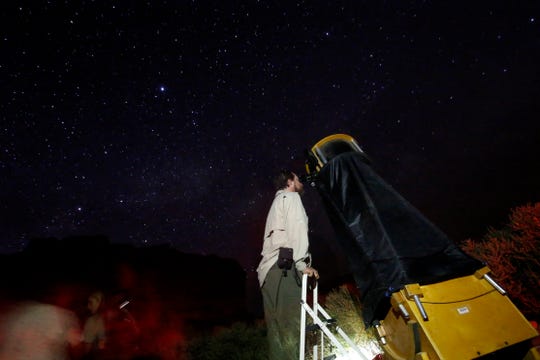 "I had never been to a place as dark as Chaco," he said. "It's humbling. It makes you realize there's a lot going on up there."

Ranger Kathy Hensler said that kind of experience is common among those who see the park on a clear night for the first time. With dark skies becoming increasingly rare in many parts of the country, Chaco offers a unique nighttime perspective, she said, especially at this time of year, when the sky typically starts to become crystal clear.

"There's a lot of people these days who have never experienced the night sky," she said, adding that with so much of the American population crowded into urban or suburban settings, there is little opportunity for them to get away from unnatural light.

"Then, they come here, and they're so excited because they say they saw this thing last night going across the sky," she said, laughing.

Hensler will be leading the interactive children's activities that will be offered Sept. 21. A number of stations will be set up that offer kids hands-on opportunities to study astronomy, including a solar telescope, a bracelet-making station featuring materials that change color by reacting to the UV in sunlight, storytelling sessions about the constellations and the chance to build a model of the park's Pueblo Bonito to align with the summer solstice.

A variety of lectures and tours related to astronomy or the park's astronomical features are offered throughout the day on Sept. 20-22, while other programs will take place at 8 p.m. the first two days that offer visitors the chance to view the night sky through powerful telescopes. Hensler said there also will be sessions offering tips to photographers about the best way to photograph the night sky on those days, while a campfire program is set for 7 p.m. Sept. 22 that focuses on the alignment of the park's structures with the equinox. 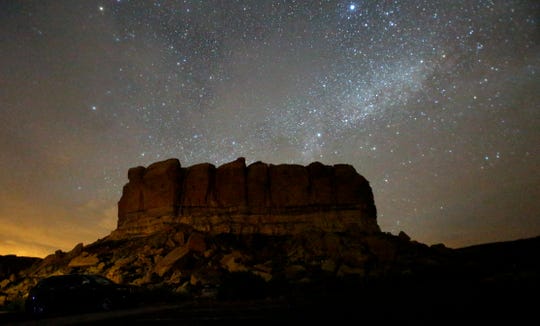 Alyssa Richmond, a physical sciences intern at the park who will be completing her one-year assignment over the next several days, will be delivering a presentation at 2 p.m. Sept. 20 in the visitors center that covers her survey of groundwater sources at Chaco.

Despite Chaco's high-desert setting, Richmond said she has documented a surprising number of water sources ranging from springs to flowing water to seeps. Those relatively wet areas attract abundant wildlife and plant communities, but they are also home to a large number of Chaco artifacts, she noted.

Richmond said the year she has spent living and working at the park has exceeded her expectations. Not only did she develop some great field skills that she said would serve her well during her next career stop — that as a coordinator for the San Juan Watershed Group — she loved being able to look out her cabin window at night and clearly see the constellations.

"I never saw the night sky until I came to Chaco," she said. "It put in perspective for me the way humankind has been disconnected with it."

That darkness, and Chaco's designation as an International Dark Sky Park, is something officials have worked hard to protect in recent years. Hensler said the ambient light from Farmington, Gallup and Grants are monitored three to four times a year as part of a process to maintain the quality of the park's dark sky. 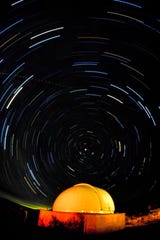 Star trails swirl in a concentric pattern above the dome of Chaco Observatory at Chaco Culture National Historic Park in this undated photo. (Photo: Photo by NPS)

"We preserve our darkness here as well as we can with special or no lighting," she said.

Hatfield said little things can make a big difference, noting how the park had to swap out a bright, colorfully lit vending machine for a much darker one when it was pursuing its dark sky park designation.

He said the festival has proven quite popular over its first three years, with each of those daytime programs attracting between 30 and 50 participants and the evening programs drawing 60 to 80 people. The event does result in an attendance bump for the park, and Hatfield and Hensler both noted on Sept. 17 that the Chaco campground was already full and is expected to remain at capacity through the weekend.

The festival activities will come to an end early on Sept. 23 when the park holds its annual autumnal equinox observance. Visitors will be led from the park gates at 6:15 a.m. to the Casa Rinconada great kiva, where the sunrise is aligned with the structure.

"It's a special event and will show there are many different ways of experiencing ancient astronomy, as well as modern astronomy," Hensler said. "It's like a big extra bonus."

The observance is a popular annual event, and the group allowed to participate will be limited to 100 people. Hensler said anyone who wants to be sure of getting in should arrive no later than 5:15 a.m., perhaps even as early as 4:50 a.m.

Park officials hope the Astronomy Festival is an enjoyable experience for visitors, but they also want the people who experience it to carry its message home with them.

"That's our goal, of course," Hatfield said. "Over the course of the last 15 or 20 years, night sky parks like Chaco have become a natural resource, just like a stream or river. … To protect those resources is not hard, it's just a matter of turning off a light. If people go back to their homes and they're moved to turn off that security light or deflect it toward the ground, that's an example of the little things we can do."

Admission to all the Astronomy Festival events is free with paid park admission. Chaco Culture National Historic Park is located on County Road 7950 in Nageezi off U.S. Highway 500 south of Bloomfield. Call 505-786-7014, ext. 261 for more information.