Gov. Susana Martinez and state officials visited Farmington to mark the one-year anniversary of the Gold King Mine spill.

One year after the Gold King Mine spill released a toxic plume of mine waste into the Animas River, officials and residents say questions remain about the safety of the water and how the EPA will be held accountable for the environmental disaster 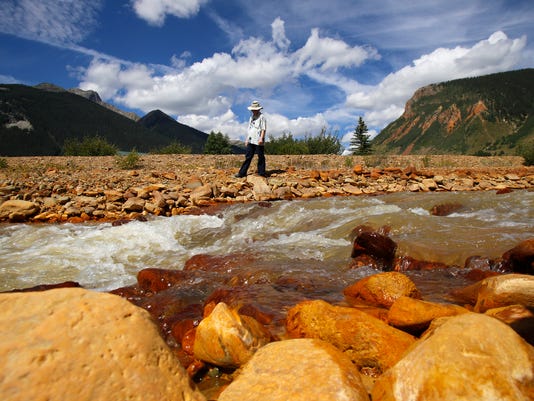 Melanie Bergolc, a resident of Silverton, Colo., walks along the banks of Cement Creek in Silverton on Aug. 10, 2015, where residue from the Gold King Mine spill is evident.(Photo: Daily Times file photo)

FARMINGTON — New Mexico Gov. Susana Martinez joined state and local officials who gathered along the banks of the Animas River here today to mark the one-year anniversary of the Gold King Mine spill.

“It’s a sad situation when it’s the anniversary of a catastrophe that should never have occurred,” Martinez said. “It was absolute devastation.”

While the river behind Martinez flowed a typical monsoon-season brown, near this time last year, it contained a toxic yellow plume of mine waste. Triggered by a crew from the U.S. Environmental Protection Agency working to clean up abandoned mining sites near Silverton, Colo., the spill released roughly 880,000 pounds of heavy metals into a tributary of the Animas River.

Although 12 months have passed since the accident, speakers today said the disaster left a physical and emotional stain on local communities.

“That’s why we’re talking about this today,” New Mexico Environment Department Secretary Ryan Flynn said. “The EPA says everything has returned to normal, but the data tells us otherwise.”

Flynn and fellow officials pointed to recent studies showing high lead levels in river sediment in what amounted to a shower of criticism against the federal agency.

“The EPA has delayed, dodged and changed the rules to avoid accountability,” Martinez said. 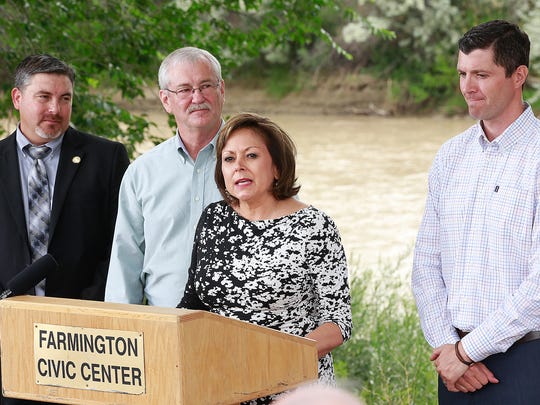 In the wake of the spill, the state has battled the EPA over funding for long-term monitoring programs. The NMED has also questioned the agency’s science, specifically its adoption of recreational screening levels for determining heavy-metal contamination. The standards, which are based on what’s safe for campers or river rafters, establish a threshold of 20,000 parts per million for lead in the soil. The EPA’s traditional standard for residential areas maintains a maximum level of 400 ppm.

“The EPA has delayed, dodged and changed the rules to avoid accountability.”

Disagreements over funding, response efforts and scientific standards between state and federal officials have led to a string of legal action by the state. In May, the New Mexico Attorney General's Office filed lawsuits on behalf of the NMED against the EPA and several mining companies for their role in the disaster. One month later, New Mexico sued the state of Colorado in U.S. Supreme Court, alleging its relaxed mining regulations allowed the buildup of waste water released during the Gold King blowout. In all, the lawsuits seek about $130 million in damages. 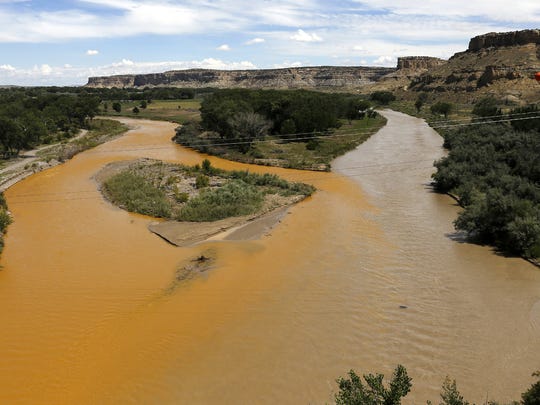 The confluence of the Animas and San Juan Rivers is pictured Aug. 8, 2015, after the Gold King Mine spill. A plume of toxic mine waste is seen in the Animas River, at left, as it merges with the San Juan River, at right. (Photo: Daily Times file photo)

Navajo Nation President Russell Begaye said in an email today that the tribe remains disappointed that the EPA has not fulfilled its promises. He said if that continues, the tribe will sue for negligence.

The EPA has declined to comment on factors related to existing and potential lawsuits, but in previous interviews with The Daily Times, spokeswoman Christie St. Claire said the agency “stands by” its science.

EPA officials also note the spill highlights a larger issue threatening the Animas River. In a report released on Monday summarizing the EPA’s response over the past year, the agency claims that aside from the Gold King site, numerous abandoned mines in the surrounding Bonita Peak Mining District continue to leak contaminated water. The report states that during one day of spring runoff, the sites can combine to discharge a mass of heavy metals comparable to the amount released during the spill. 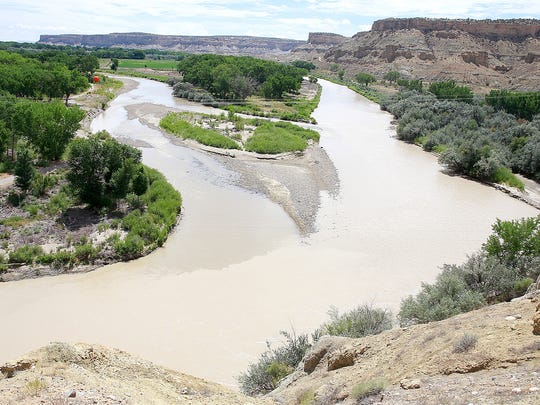 The confluence of the Animas and San Juan rivers is pictured on Wednesday, nearly one year after the Gold King Mine spill. (Photo: Steve Lewis/The Daily Times)

That ongoing concern has prompted the EPA to propose adding the mining district to its National Priority List, commonly referred to as Superfund sites. The designation would provide funding and resources for cleanup efforts. But the agency’s actions during that process also have drawn criticism from New Mexico. Officials today condemned the EPA for not initially seeking public comment from New Mexicans on the proposal.

“They don’t consider us to be stakeholders,” McQuillan said. “But we all know rivers flow downhill.”

After requests from state agencies, the EPA held a meeting in Farmington in June at which officials said the mining district met all the qualifications for a Superfund designation during initial assessments. An agency spokesperson said in an email today that the agency is working to finalize the listing this fall. 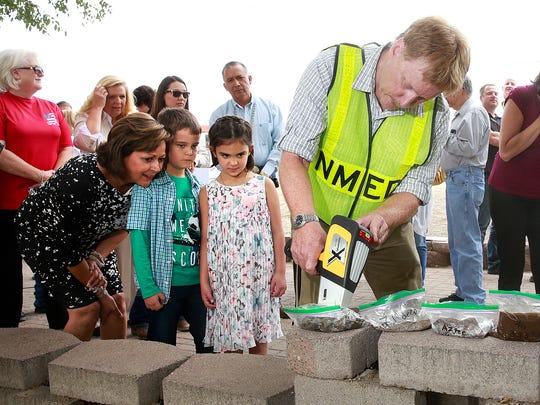 The spill has stirred up concerns from area residents, as well.

Rick Nez, president of the Navajo Nation's San Juan Chapter, said his constituents remain skeptical of the safety of the river water. He said many farmers have opted to let their fields lay fallow until the impacts of the spill are better understood.

“Even though it’s tragic, there’s been so many positives. The biggest one is the way that the community has come together.”

That desire for more information has prompted the NMED to establish a Citizens’ Advisory Committee, which has been charged with informing the public about ongoing response efforts.

Committee member Susan Palko-Schraa said the forum serves as an important outlet for affected communities. She said the issue of a contaminated river is yet another burden for a region already struggling from economic hardships.

“Even if people can’t get all their questions answered, at least they can get a response," she said.

Officials today said the creation of the committee is one positive thing that has emerged from the spill's aftermath. The NMED's Flynn said the incident served as an eye opener, drawing attention to water quality issues in northern New Mexico.

“Even though it’s tragic, there’s been so many positives,” he said. “The biggest one is the way that the community has come together.”

Editor's Note: A version of this story published on Aug. 4 misspelled the last name of a U.S Environmental Protection Agency official. The official's name is Christie St. Clair. A statement that was attributed to St. Clair should also have been attributed to an agency spokesperson. ​ 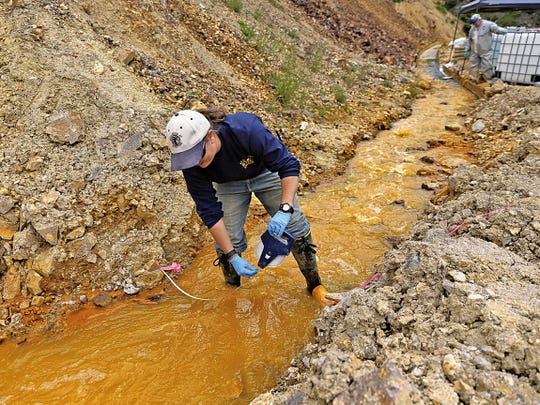