New Mexico plans to sue EPA over mine spill

New Mexico officials plan to sue the federal government and the mine owners that were the source of the mine spill.

New Mexico plans to sue EPA over mine spill

The Animas River flows through Farmington's Berg Park in Aug. 8 after the Gold King Mine spill.(Photo: Daily Times file photo)

ALBUQUERQUE — New Mexico plans to sue the federal government and the owners of two Colorado mines that were the source of a massive spill last year that contaminated rivers in three Western states, officials said Thursday.

The New Mexico Environment Department said it filed a notice of its intention to sue the U.S. Environmental Protection Agency over the spill, becoming the first to do so. The lawsuit also would target the state of Colorado and the owners of the Gold King and Sunnyside Mines.

An EPA cleanup crew accidentally unleashed millions of gallons of contaminated wastewater in August at the inactive Gold King Mine near Silverton, Colorado. It fouled rivers in Colorado, Utah and New Mexico with contaminants including arsenic and lead, temporarily shutting down drinking-water supplies and raising concerns about long-term effects to agriculture.

The spill sent a yellow plume through the Animas Valley and into New Mexico and the San Juan River, forcing farmers and municipalities to shut off their taps. Farmers and ranchers on the Navajo Nation were left without a key water source for their crops and livestock for weeks.

The New Mexico regulators said they will sue if the EPA does not begin to take meaningful measures to clean up the affected areas and agree to a long-term plan that will research and monitor the effects of the spill.

“From the very beginning, the EPA failed to hold itself accountable in the same way that it would a private business,” said Ryan Flynn, state Environment Department cabinet secretary.

“From the very beginning, the EPA failed to hold itself accountable in the same way that it would a private business.”

“EPA is working closely with the states to develop a long-term monitoring plan to evaluate potential environmental impacts from the spill and will be meeting with representatives in early February,” St. Clair said. “EPA is also reimbursing state and local agencies for response-related costs associated with the spill.”

Larry Perino, a reclamation manager for Sunnyside Mine, said the mine was not involved in the spill and has no responsibility.

“We will vigorously defend ourselves from any potential legal action,” he said.

A representative for Gold King Mine did not immediately respond to an email requests seeking comment.

Roger Hudson, a spokesman for the Colorado attorney general, said the office has not yet seen the notice and had no comment. Hudson did not say if Colorado also planned to sue the EPA.

Flynn said Colorado balked when New Mexico asked for information about the spill’s effects on the Animas River watershed that the two states share. In fact, Colorado asked New Mexico to pay about $20,000 for a public record’s request, he said.

The Navajo Nation has said it may consider legal action against the EPA but nothing formal has been filed.

The spill occurred when workers for the agency and its contractor, Environmental Restoration LLC, started excavation work intended to allow them to safely drain the mine.

Some criticized the EPA for failing to take adequate precautions despite warnings that a blowout could occur. But Interior Secretary Sally Jewell said a review by her agency showed the spill was “clearly unintentional.”

People who live near the idled and leaking Gold King Mine say local authorities and mining companies have spent decades spurning federal help to clean up the site.

The owners of the two mines have been disputing the source of the wastewater buildup for years. Colorado-based San Juan Corp., which owns the Gold King Mine, claims it stems from a project in the 1990s to plug a segment of the Sunnyside Mine. They say the plug caused the wastewater to build up and get pushed into surrounding mines, including Gold King.

In 2011, Kinross offered $6.5 million to help clean mining waste from the upper Animas River while vowing to “vigorously contest” any effort to make Sunnyside liable for Superfund-related cleanup costs.

The mine has yet to spend the money but supports a “collaborative approach” among various parties, Sunnyside reclamation director Kevin Roach said. 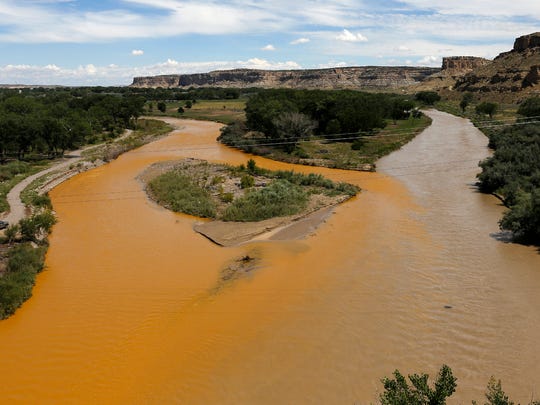 The confluence of the Animas River, at left, and the San Juan River, right, is pictured Aug. 8 as a plume of orange water contaminated with mine waste flows through Farmington after the Gold King Mine spill. (Photo: Daily Times file photo)