As scientists study a methane cloud over the Four Corners, oil and gas operators brace for new regulations. 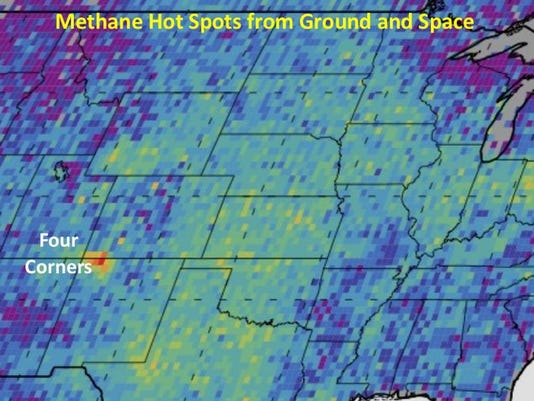 The U.S. Environmental Protection Agency — which is proposing new rules to better regulate methane emissions — projects emissions from the oil and gas industry will increase as technology that includes horizontal drilling and multi-stage hydraulic fracturing makes marginal operations like some of those in the San Juan Basin's Mancos shale play economically feasible. The Bureau of Land Management is also working on a methane waste rule.

In an effort to address the problem of climate change, the Obama administration proposed cutting methane emissions from all U.S. oil and gas production by nearly half over the next decade. The federal effort seeks to reduce methane emissions from oil and gas operations by 40 to 45 percent by 2025, compared to 2012 levels. Natural gas is 90 percent methane, a climate-warming pollutant 80 times more potent than carbon dioxide over a 20-year time period.

After a 2014 report by NASA and the University of Michigan using European satellite imagery captured between 2003 and 2009 showing a large "hot spot" of atmospheric methane over the Four Corners, scientists started a project to better define the cloud's sources. The San Juan Basin has for many years been the largest producer of natural gas in New Mexico, which is the second leading producer of natural gas in the U.S.

Scientists from the University of Colorado, the University of Michigan, the National Oceanic and Atmospheric Administration and NASA conducted research in April using aircraft and two vans outfitted with monitors and other technical equipment to record methane levels in the region with the goal of getting more detailed data. 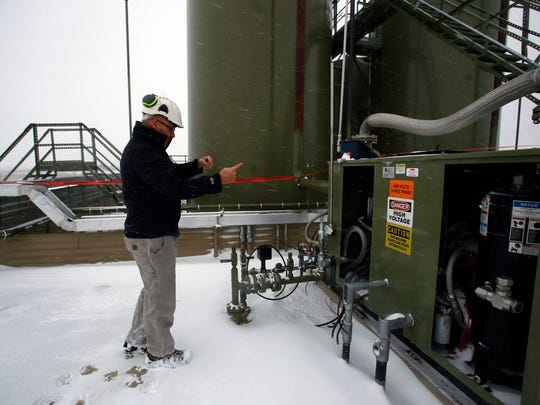 Sweeney said the study's focus has been to pinpoint sources of atmospheric methane, but that data will not be released until next year.

Sweeney attended the fall meeting of the American Geophysical Union in San Francisco and said there were "a few talks that showed some of the results of the work that we did."  He said the point of the meeting was to generate feedback from scientific peers, "not to broadcast the papers to the wider public."

"We have not been surprised by anything we have found," Sweeney said in an email responding to questions on the new study. "The multi-scale approach that we have taken will not only allow us to quantify methane on regional scales but hopefully point to specific processes responsible for the emissions. We hope to have more results to share by May."

Katy Human — spokeswoman for the Cooperative Institute for Research in Environmental Sciences, or CIRES, at the University of Colorado at Boulder — said the air and ground study begun in April will produce a final study on atmospheric methane sources in the Four Corners region early next year. The report will be announced at an event yet to be scheduled in Durango, Colo., Human said.

Meanwhile, oil and gas operators in the San Juan Basin are pushing back against the proposed federal rules along with the implication that the industry is largely to blame for the high levels of atmospheric methane over the Four Corners region due to venting, flaring, leaks and other emissions sources.

Wally Drangmeister of the New Mexico Oil and Gas Association said that the methane sources in the area are too numerous to lay blame squarely on oil and natural gas production.

Drangmeister listed area coal mines, gas refineries, landfills, naturally occurring coal bearing outcroppings, and agricultural operations like feedlots as a sampling of some of the many contributing sources to atmospheric methane.

"There are are natural sources, certain natural coal bed outcroppings on the edges of the basin, that certainly will play a role," Drangmeister said. "A great deal of agriculture, coal mining and oil and gas production do play a part. It’s a very dynamic issue."

Drangmeister said the industry is working to remedy any loss of methane into the air with technology such as green completion retrofits that include low- or no-bleed pneumatic devices.

"We’ve been reporting methane emissions to the EPA on a regular basis," he said. "When you look at the actual releases the industry has done a really good job. The amount is not as high as what they are saying. The industry is actually trending down with the amount of methane that is being vented or flared even as natural gas and oil production is going up. We’re in the business of capturing methane. If there are issues, we want to know about it."

One technological advance that may help operators better capture methane from leaky storage tanks at well facilities is being produced by an Albuquerque-based company called Quantigy Engineering.

Jason Libersky, Quantigy's CEO and co-founder,  put his data analysis and computational physics skills together and designed a vapor recovery unit, manufactured by Twin Stars Ltd. in Bloomfield. Libersky also created cloud-based software that oil and gas companies can use to monitor and analyze the amount of gas leaking or venting from the oil and gas equipment. Libersky said that while the basin's more than 25,000 wells are "leaking just a little bit," his product can significantly reduce methane releases and help operators make more money at the same time. 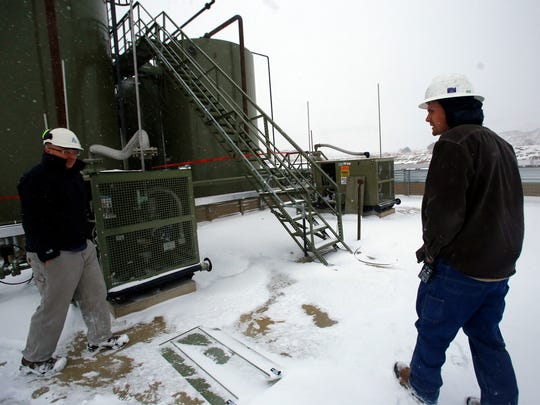 "With the regulatory component around (the issue), you're killing two birds with one stone," Libersky said as he showed a nearly completed WPX Energy oil well pad near Lybrook that had installed two twin VRU systems. "A lot of the wells in the San Juan (Basin) have been operating for 20, 30 or 50 years. Each well could have leaked millions of dollars over its lifetime."

Libersky is currently testing a VRU for a single well pad. He said there are about 400 of his large VRU systems in operation in the Permian Basin and 40 to 50 in the San Juan Basin.

WPX, a Tulsa-based oil and gas company that has increased its presence in the San Juan Basin in recent years, has sought to reduce venting and flaring times with new technologies designed to capture fugitive releases of methane.

Nica Hoshijo, a WPX senior environmental specialist, said that the the VRU systems the company uses achieve capture rates of 95 percent on average. That rate spells profits the company would otherwise allow to escape into the open air.

Hoshijo said that the company employs a full-time staff person to monitor leaks at well sites. Armed with a $100,000 FLIR, or forward looking infrared, camera, the employee visits well pads and uses the camera imaging to detect leaks from thief hatches, loose valves or other sources to signal repair work when needed.

Based in Durango, Colo., Pete Dronkers of Earthworks said he has spent the majority of the year shooting video with his organization's FLIR Camera to document the amount of methane released into the air from oil and gas operations in the San Juan Basin. 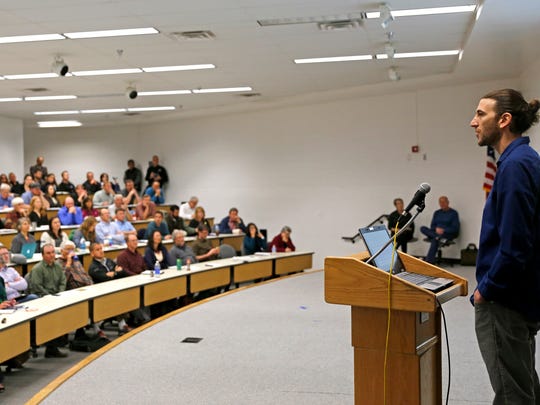 Capturing what is otherwise invisible to the naked eye and carries no odor when emitted, Dronkers admits an exact scientific breakdown of the sources of atmospheric methane in the region is "still up in the air." But he said recent events like the largest gas leak in U.S. history that erupted from Southern California Gas' Aliso Canyon natural gas storage facility in October make the documentation of the issue with new technology essential to help raise awareness.

"It’s hard for us to say just who the culprit is," Dronkers said. "Oil and gas processing facilities, leaks in the gathering systems, the (hydraulic fracturing) drilling process. It’s definitely related in some way to oil and gas development."

With new BLM and the EPA regulations imminent, operators like Dugan Production Corp. stand to lose money and will be forced to plug low-producing, older wells, according to John Alexander. the company's vice president.

Alexander said he awaits the results of the air and ground study, but is frustrated with what he terms an overzealous regulatory environment created by the federal government that makes the struggle Dugan Production and other industry operators face even harder.

"We're all in this together and that's the way we're going to look at it," Alexander said. "We're not going to get sympathy ... so we're not going to look for it. I've worked in this basin for 43 years. I have raised a family here. We live here and not one time have I got up and said I'm going to do something stupid and hurt the environment. That's morally bankrupt."

Alexander said that the looming regulations double the pain the industry was already experiencing when oil prices tumbled last fall and natural gas prices dropped to a 13-year low.

"This is an energy intensive country. God gave us the directive to use the resources we have here on Earth and take care of them. But many times it appears people want to give up our standard of living," he said. "When you drive your gasoline-powered automobile and you leave from your natural gas-heated home on an asphalt-coated highway to go to your office, heated by natural gas, and you turn on your light switch and have your room flooded by electricity and you're nice and warm in your clothing made from hydrocarbon products and drinking out of a bottle made from ethane, and you're really mad at oil and gas companies and upset about whatever the industry has done and you use the products and you carry your (protest)  sign, I have only one thing to say to you — you're welcome."