Farmington leaders are excited as the city takes another step forward on the Complete Streets project. 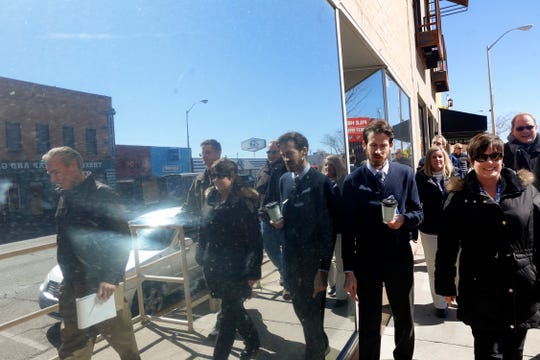 Reflected at left, Scott Day a consultant with Urban Development Services walks with community members during a tour along Main Street in Farmington. (Photo: The Daily Times file photo)

FARMINGTON —The City of Farmington is one step closer to achieving a dream it has been working toward for more than 15 years.

The City Council has approved contracting with Albuquerque-based AUI, Inc. for the Complete Streets project, which aims to revitalize the downtown and create a more pedestrian-friendly atmosphere. The city will pay the firm more than $9.2 million prior to tax.

The Council unanimously approved the contract during its Dec. 10 meeting, which can be viewed online at fmtn.org.

The project also includes about $2.5 million of utility infrastructure upgrades that would have been required with or without the Complete Streets project, according to City Manager Rob Mayes. 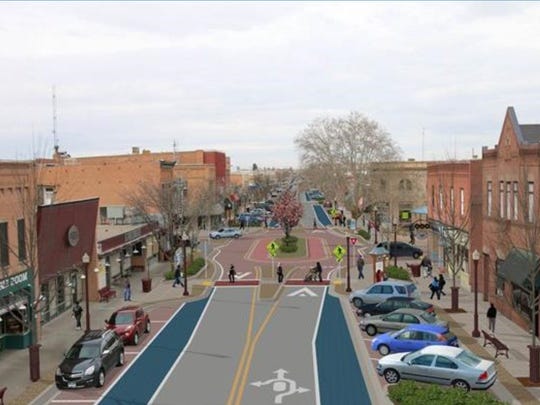 A rendering shows what the Main Street will look like after the Complete Streets project is completed. (Photo: Courtesy of city of Farmington.)

During the meeting, Councilor Sean Sharer said it is a hard decision to spend millions of dollars on the downtown, but added that the city has been waiting to invest the money in the project.

“This project here’s been something we’ve been working on for a long time at the city,” Sharer said.

He said it first became a city priority in 2002 and the previous council allocated the majority of the funds to complete it.

“This is kind of a proud moment for all of us to see such a dream getting one step closer to coming to fruition,” he said.

During the City Council meeting, Mayor Nate Duckett also praised the city’s efforts, including the proactive measures taken to educate downtown business owners and the community.

"The City is very pleased to be moving forward with this exciting project," Duckett said in a statement to The Daily Times.

Like Sharer, Duckett highlighted that the project has been "a strategic part of our community's vision since it was adopted with much public input in our 2002 Comprehensive Plan."

"It is this kind of bold vision that shapes the future of our community and as such will be transformative for our downtown," he said. "This will be a project that our citizens can be proud of and that will create vibrancy and a sense of place for the community that will bolster existing businesses and embolden new ones to join in our vision. Drawing new investment into our City's core and encouraging the redevelopment of historic assets is critical to preserving the 'Heart' of our community for us and future generations."