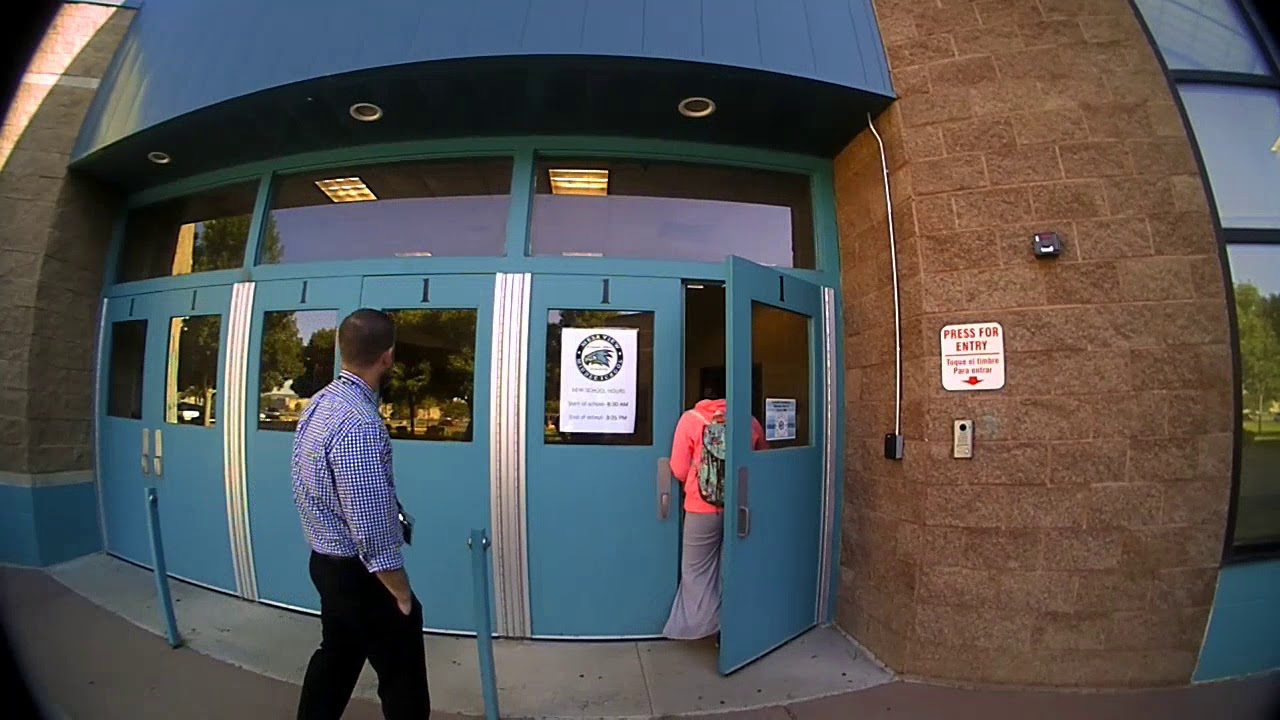 The August incident resulted in a tort claim against the police department and has also prompted police to review policies regarding physical contact with schoolchildren.

"As the chief, it's a brutal failure," Hebbe said. "It's a failure on our agency and I can't tell you how upsetting it is to me."

Christensen had been a school resource officer for four years.

The incident occurred on the morning of Aug. 27 at Mesa View Middle School at 4451 Wildflower Dr. on the east side of Farmington.

Farmington police screened for The Daily Times a roughly six-minute clip from Christensen's body camera and a video statement from Hebbe the agency was planning to share on the night of Oct. 20 on its Facebook page.

The agency also uploaded an extended clip of more than an hour's worth of footage from Christensen's body camera to its YouTube account that evening, but pulled the video the morning of Oct. 21 to remove some personal information about the student, spokesperson Nicole Brown said. She said the redacted video will be posted again as soon as possible.

The footage showed Christensen's response to a reportedly disruptive 11-year-old female student near the entrance to the middle school.

Christensen had spoken with school officials about the student in the days before the incident, Hebbe said.

The Farmington Municipal School District issued a series of statements on the incident, saying it does not comment on personnel matters or pending litigation, and would not discuss details of this incident, out of "respect for student privacy, and to comply with student privacy laws."

"Farmington Municipal Schools extends its apologies to the student and family involved in this unfortunate incident," the district said Oct. 20 in an unsigned statement. "FMS administration is reviewing this incident with the intent of putting into place procedures and practices to prevent another instance like this. The safety of all students entrusted to our care is among our highest priorities. We are committed to continuing our efforts in that endeavor."

The footage shows what Hebbe described as an overly emotional response by Christensen to take the student into custody after he believed the student allegedly committed two crimes.

During the incident, Christensen believed the student possibly committed two instances of battery.

The officer believed the student may have struck a school official with one of her elbows, and also shoved a principal's hands so she could exit the building.

When the officer later reviewed his footage, Christensen realized he was wrong and that the incidents didn't occur, according to Hebbe.

Christensen's attempt to place the student into handcuffs led the student to resist, resulting in the two of them screaming at each other as they wrestled, each trying to control the incident.

At one point, Christensen slammed the student into a window, and he is also struck in the face by the student during the struggle. The student repeatedly told the officer to leave her alone, and said she wanted to go home with her mother.

At another point, a school employee picked up the officer's body camera, which had been knocked off during the struggle, and set it upright on the ground to continue recording the incident. The administrator protested the level of force being used against the student, and was then rebuked by the officer.

Hebbe said the student was diagnosed with a mild concussion and had some scrapes and bruises following the incident.

Toward the end of the clip, Christensen radioed dispatch for another officer to be sent to the scene.

The daily incident log lists the call at 9:32 a.m., with battery listed as the incident type.

Hebbe stressed the student was not handcuffed during the incident and she was released to her mother later that day.

Hebbe stated during an interview that his agency has been served a notice of tort claim regarding the incident.

The mother of the student filed a complaint against Christensen on Aug. 28, the same day an internal investigation was launched.

The officer was placed on administrative leave the same day.

Police officials showed the mother of the student all of the body camera footage from the incident and provided her a copy of the footage.

The New Mexico State Police were contacted on Aug. 29 to conduct a criminal investigation into the officer's actions and did not recommend criminal charges in the case, according to Hebbe.

The case was referred to the San Juan County District Attorney's Office.

Hebbe said the student possibly faced a charge of assault on an officer and interference with the educational process.

The Farmington police investigation was handled by the internal affairs department, which reported Christensen violated the policies for unsatisfactory performance and use of force.

The officer gave his resignation to the agency on Sept. 24, and it became effective on Oct. 1.

Hebbe believes the State Police investigation was completed before Christensen gave his resignation.

Hebbe said he takes the incident very seriously and personally, which is what led to the agency publicly addressing the incident and releasing Christensen's body camera footage.

"I really do value the relationship we have with our community and this hurts it. There is no way around it," Hebbe said.

The agency hasn't made any firm decisions on updating policy yet, but is looking at limiting the amount of physical contact officers made with juveniles unless the safety of others — including the officer — is in jeopardy.

"For the most part, we don't want (officers) to have physical contact with these kids," Hebbe said. "But, under some circumstances, that you have to be able to articulate, you would be allowed to."