The new agreement is the first step of many aimed at keeping the San Juan Generating Station open.

FARMINGTON — Farmington and Enchant Energy are one step closer to keeping the San Juan Generating Station open after 2022.

During a special meeting on Aug. 15, the City Council unanimously approved transferring 95 percent of the San Juan Generating Station to Enchant Energy after the city inherits the power plant.

The Farmington City Council meeting can be viewed online at fmtn.org. 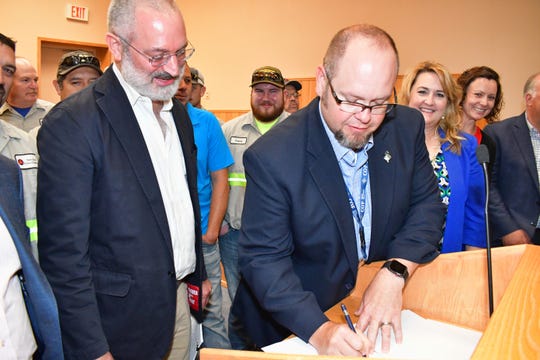 The agreement is a necessary step for Enchant Energy to complete various negotiations.

Enchant Energy Board Chairman Larry Heller said the next steps include:

“We probably have seven or eight large paths that we have to follow,” Heller said. “All of which we’ve begun.”

He said he anticipates one of the biggest challenges will be finding customers for the electric power produced by the plant, but Enchant Energy is already working with a Nebraska firm to do just that.

One step closer to ownership transfer

Farmington legal counsel Germaine Chappelle said there is a series of steps left before Enchant Energy can take ownership of the power plant.

“We have a long way to go before we get to the finish line,” she said.

Heller said Enchant Energy will know within six months to one year whether it can complete the project. 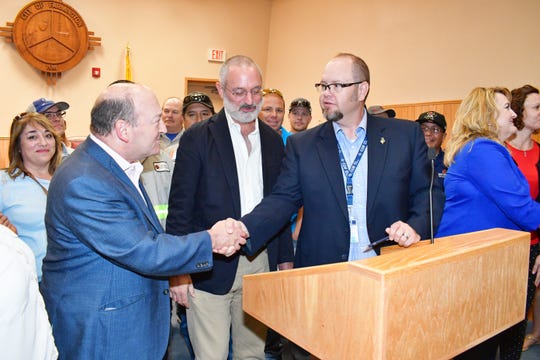 “We hope that that will still leave Farmington with plenty of time to look for alternatives to find 40 to 50 megawatts of power, which doesn’t grow on trees,” Heller said.

Farmington officials say if Enchant Energy’s carbon-capture proposal does not become reality, the city will be in the same position it was a year ago — preparing for the power plant to close in 2022.

If the transfer does occur and Enchant Energy becomes the plant’s operator, Farmington will then purchase power from the San Juan Generating Station for 13 years at a cost 20 percent lower than what it currently pays for electricity from the power plant. Electric utility director Hank Adair said that rate is also about 6 percent lower than what Farmington pays for power from the wholesale market.

“I cannot see in any way, shape or form how this isn’t a positive thing for the city of Farmington, the state of New Mexico, the entire Four Corners region,” Mayor Nate Duckett said during the special City Council meeting on Aug. 15.

He said the agreement paves the way to keeping the power plant open, which saves jobs and tax base. In addition, the contract signed this week ensures Farmington Electric Utility System customers will not see rates increase, and Farmington will not be taking on additional liability. 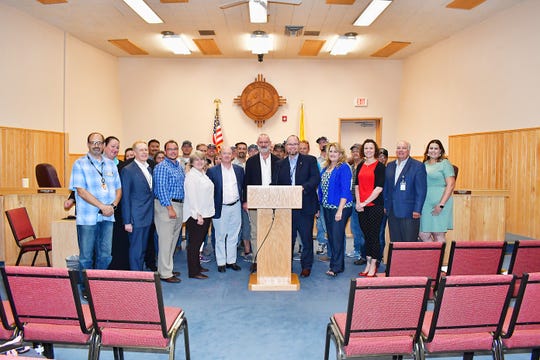 Farmington and Enchant Energy officials as well as audience members stand for a photo Aug. 15 at the end of a special council meeting. (Photo: City of Farmington)

“This is about Farmington and the people who call this place home,” said Councilor Linda Rodgers. “I love Farmington. I want to see all of us stay in Farmington. This decision gives us the best chance to do that.”

“People may say this is a bad idea, it’s unproven technology or we can’t do it or it’s wishful thinking, but God if we don’t do everything possible, everything in our power to try to save your families, we’ve failed as elected officials.”

Meanwhile, the Institute for Energy Economics and Financial Analysis, a nonprofit organization the supports the use of renewable energy, released a report on Aug. 16 calling the project “dead on arrival.” Editor and analyst Karl Cates said the contract lacks details, including timelines and funding.

MORE: PNM official explains why the utility did not pursue carbon capture technology

Those details, Farmington officials say, will be hammered out in future agreements and contracts. A presentation during the City Council meeting listed at least eight other transaction agreements that must be in place before the transfer occurs.

“People may say this is a bad idea, it’s unproven technology or we can’t do it or it’s wishful thinking, but God if we don’t do everything possible, everything in our power to try to save your families, we’ve failed as elected officials,” Councilor Sean Sharer said.

PNM commissioned a study in 2010 to look at carbon capture for the San Juan Generating Station. This is why the utility chose not to pursue it. Wochit

PRC will not regulate Enchant Energy

Once the transfer occurs, the Federal Energy Regulatory Commission will provide regulatory authority over Enchant Energy because Enchant Energy will operate as a wholesale power provider.

Currently, Farmington owns a portion of unit four. Once Enchant Energy takes ownership, Farmington will have a 5 percent share of the entire plant. That means if unit four is taken offline for maintenance or repair, Farmington can still receive power from the San Juan Generating Station.

Adair said keeping the power plant open will save the Farmington Electric Utility System millions of dollars, including $97 million to replace the power plant and $30 million in unrecovered investment into equipment at the San Juan Generating Station.

City Manager Rob Mayes said the Energy Transition Act allows the Public Service Company of New Mexico — the current majority owner — to recover its unrecovered investment into the power plant through low-interest, securitized bonds. However, that option is not available for the city of Farmington. 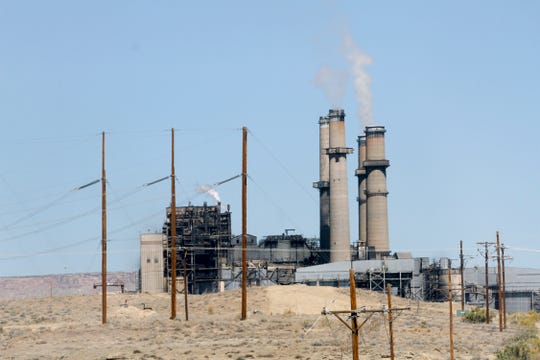 The new agreement does not mean there will not be layoffs at the mine or the power plant leading up to Enchant Energy taking over operations in 2022.

Meanwhile, Mayes said Farmington and Enchant Energy will work to “stop the bleeding as quickly as possible” and, hopefully, hire back some of the lost workforce.

Mayes emphasized that PNM and Farmington are not enemies and will be working together moving forward.