The Bisti Bay at Brookside Park will open in July and the Lion's Club has paid for the public to receive free admission on the first day.

Brookside Pool officially opened in May 1959, but was closed in 2016. A new facility is being built to replace the popular attraction. Wochit

FARMINGTON — The much anticipated Bisti Bay Water Park’s opening has once again been pushed back, and officials say the large water slide will not be ready this summer.

Farmington had hoped to open the facility Memorial Day weekend or in early June, however the city now says the water park will not open until July.

"The plan is for a July opening," said Outdoors Recreation Industry Initiative Director Cory Styron in an email. "Most projects have some unforeseen delays, and this one is no different. We were hoping for an early date opening, but as the project progressed we found the need to work out issues to ensure a Jolt Worthy experience."

The City of Farmington hopes to open the Bisti Bay Water Park for the Fourth of July celebrations. The facility will remain open through Labor Day weekend.

Parks Recreation and Cultural Affairs Director Shaña Reeves said the first day of swimming has been sponsored by the Farmington Lion's Club. That means the public will have the chance to swim for free. 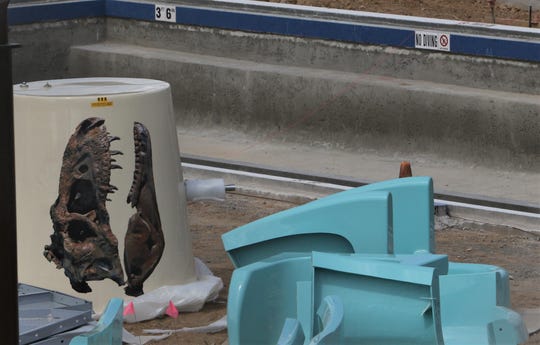 A depiction of a dinosaur fossil is seen on an item that will be placed in Bisti Bay at Brookside Park. (Photo: Hannah Grover/The Daily Times)

"The community is really going to love the 'Bisti-like' atmosphere," Reeves said in an email. "The deck contains fossil tracks to follow, the lazy river and zero-depth playground (totaling approximately 110,000 gallons) will provide guests with entertaining ways to cool off from the sun, and the climbing feature will provide a fun challenge. Other amenities include a basketball hoop and volleyball net!"

Reeves said the facility will feature two water slides that are 26 feet tall. One will have an open flume and the other one will have a closed flume. 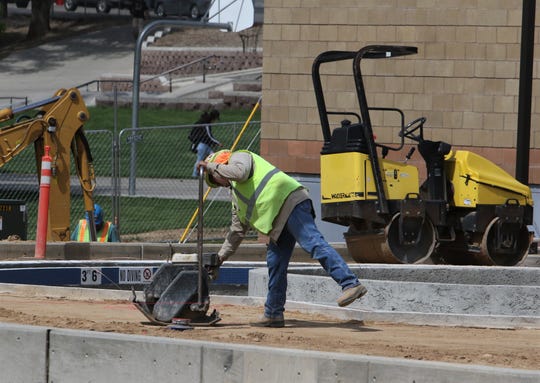 The city had initially planned to have those slides open this year. A delay in getting the steel meant those slides will not be open until next year.

Reeves said Farmington is planning to keep Bisti Bay at Brookside Park open through September. The schedule will be modified after Labor Day.

"While the specific days are not set, we do hope to be able to extend this year's season for the community as long as possible," she said.

The project cost the city about $8.1 million.

MORE: Cost of Farmington water park has increased to $8.2 million