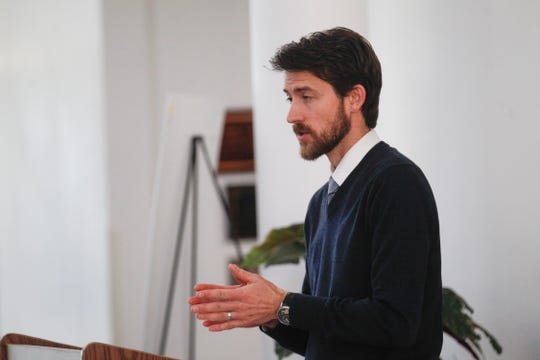 Warren Unsicker, economic development director for the city of Farmington, has earned national recognition for his work in the field. (Photo: The Daily Times file photo)

FARMINGTON —Farmington economic development director Warren Unsicker has been named one of the top young economic developers in the country by a pair of national companies.

“Economic development is such a rewarding and exciting career path, and one that needs more young people with a passion for their communities and a desire to create prosperity for their neighbors,” Unsicker said in an email to The Daily Times.

He was selected from a group of more than 170 candidates by an independent, five-member committee, according to a press release.

Unsicker moved to the Farmington area about two years ago after accepting a job as the executive director of Four Corners Economic Development. The city of Farmington hired him in October when it created its own economic development department. He started his job at the city in November.

“He has a passion for the outdoors, which is one of the industries we are trying to develop through our Outdoor Recreation Industry Initiative. Warren sees the potential in all our region has to offer,” Farmington City Manager Rob Mayes said in a press release announcing Unsicker’s award.

Unsicker came to Farmington from the Tulsa area, where he helped revitalize downtown Broken Arrow into an arts and entertainment district. He also worked to attract a conference center and a hotel to that suburban community.