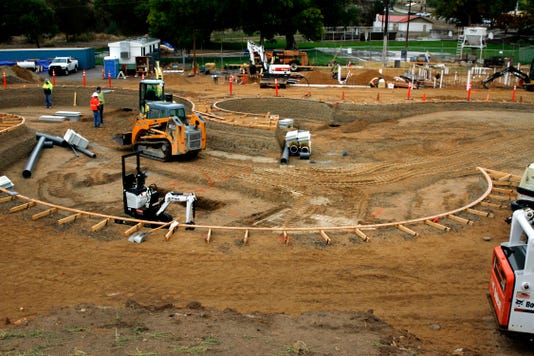 FARMINGTON — The new water park being built in Farmington officially will be known as Bisti Bay at Brookside Park following a unanimous City Council decision made this morning.

The name for the park was originally Brookside Bay Water Park, but that changed after Mayor Nate Duckett visited the Bisti/De-Na-Zin Wilderness Area to film an episode of “The Mayor’s Table” about the local attraction.

Duckett said he was “really blown away by an area that is truly unique in the United States.”

After visiting the wilderness area, Duckett returned to the City Council and asked its members to reconsider the name that was proposed by the Parks, Recreation and Cultural Affairs committee earlier this year — Bisti Bay at Brookside Park.

The new name is intended to help market and promote the water park in synergy with the nearby Bisti/De-Na-Zin Wilderness Area.

Duckett mentioned a bill introduced last week that is sponsored by U.S. Sen. Martin Heinrich, D-New Mexico, to make it easier for outfitters to give guided tours on public lands, including wilderness areas like the Bisti/De-Na-Zin Wilderness Area. 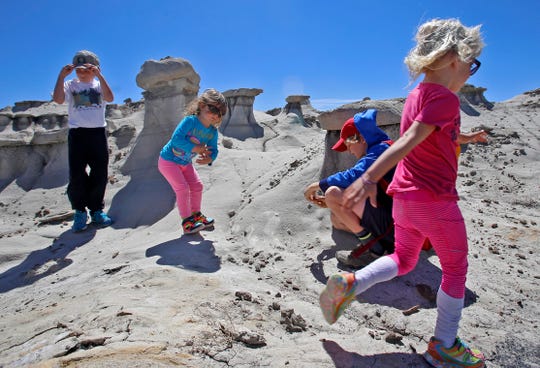 He said he envisions working with a private outfitter in the future and offering tickets to go to the Bisti Bay at Brookside Park on one day and visit the Bisti/De-Na-Zin Wilderness Area the next.

Farmington Convention and Visitors Bureau executive director Tonya Stinson presented information about the importance of the wilderness area to tourism in Farmington.

The Bisti area includes geological features dating back to 60 to 85 million years ago when the region was a tropical to semi-tropical coastal swamp. It includes unique fossils that have only been found in this area. Stinson highlighted one particular fossil — the so-called "Bisti Beast," a close relative of Tyrannosaurus Rex. The Bisti Beast, which was discovered in 1998, is currently on display in Albuquerque.

The guest log for August at the trail head on the east side recorded visitors from all over the world, including the Netherlands, Germany and Austria, as well as throughout the United States, including Minneapolis, San Francisco and Boston, Duckett said.

Water park scheduled to open in 2019

The water park is currently under construction and will take the place of the former Brookside Pool, which closed in 2016 due to health and safety concerns. The city of Farmington plans to open the water park at the end of May.