City manager: Grant-funded improvements at the airport will not be impacted by Great Lakes' decision 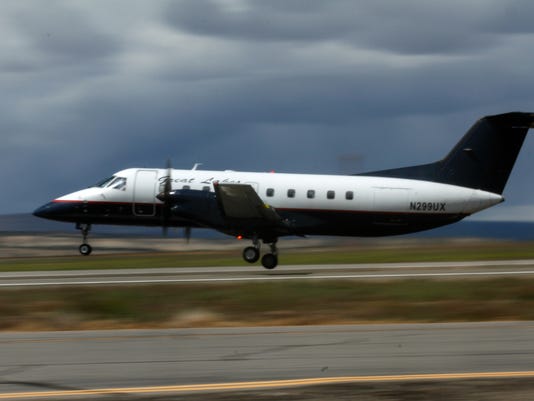 A Great Lakes Aviation airplane takes off for Denver on May 18 at the Four Corners Regional Airport in Farmington in this file photo.(Photo: Daily Times file photo)

FARMINGTON — Great Lakes Aviation is considering ending flights in and out of the Four Corners Regional Airport in November, according to a Mayor's Table video released this morning.

Great Lakes is the sole provider of commercial air service at the Four Corners Regional Airport.

"Farmington has never used taxpayer dollars to pay an airline to fly here like many communities have needed to do," Mayes said.

In the video, Mayes said Farmington has not historically qualified for federal subsidies.

Mayes said in a text message that Great Lakes' decision will not impact grant-funded improvements that have been planned for the airport.

“Farmington has never used taxpayer dollars to pay an airline to fly here like many communities have needed to do.”

In the video, Mayor Tommy Roberts and Mayes said changes in Federal Aviation Administration regulations in 2013 made created a pilot shortage. According to the video, it became unprofitable for Great Lakes to fly out of Farmington due to regulations that made it so the airline could only sell nine seats on the 19-seat airplanes.

Roberts and Mayes said the city is in discussions with Great Lakes to keep commercial flights.

While Great Lakes Aviation may no longer be flying in and out of Farmington soon, the airport continues to have a strong general aviation service. Atlantic and Vernon Aviation provide charter flights and several private pilots fly out of Farmington.