The sale runs Saturday through Wednesday at the Farmington Public Library.

Sharon Blue Eyes, the technical services director at the Farmington Public Library, sorts items Thursday that will be included in this weekend's annual book sale at the library.(Photo: Mike Easterling/The Daily Times)Buy Photo

FARMINGTON — Fresh off a year in which it raised a record amount of revenue for library programs, the Farmington Public Library Foundation's annual book sale opens its five-day run Saturday morning.

Buoyed by its largest-ever inventory and an increase in prices, last year's event raised approximately $18,000, according to Sharon Blue Eyes, the library's technical services coordinator — a healthy increase over the $14,000 or $15,000 the sale traditionally generated in the past.

Library officials aren't sure if they'll match that figure this year, but they're hoping a change in dates for the event will prompt more avid readers to come out and bulk up their personal library.

In the past, the sale has been held after Labor Day. The event was moved ahead a few weeks this year so that it wouldn't have to compete with several other local events that traditionally take place then, Blue Eyes said, including Dining with the Dead and the World Extreme Rock Crawling Grand Nationals Championship.

Buyers will have their pick of thousands of books, CDs, DVDs and periodicals that have been donated to the foundation over the past year. Blue Eyes said this year's selection won't match last year's bounty of such materials, but there still will be plenty of inventory from which to choose. 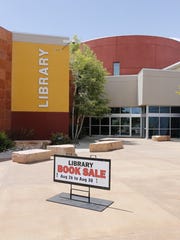 The record number of donations last year appeared to be a symptom of the troubled local economy, she said, indicating that many of those who donated materials for the sale indicated they did so because they were relocating. That number of outward-bound residents appears to have subsided this year, she said.

The bottom line for last year's event also benefited from an increase in prices, the only time library officials have hiked prices in the history of the sale. Blue Eyes said no such increase is planned this year, and prices will continue to start at $2 for hardcover books and $1 for paperbacks.

There were a few complaints about the higher prices last year, Blue Eyes said, but most buyers did not express a negative reaction. Library officials believe the price increase actually might have worked to the advantage of local individual buyers, theorizing that book resellers who had been using the sale to increase their own inventory at low prices might have been discouraged from making so many purchases.

The sale is a substantial undertaking for the library, requiring the efforts of 25 to 30 staff members and 30 to 40 volunteers, Blue Eyes said. But the money it raises supports a variety of library programs throughout the year.

Blue Eyes has been a member of the library staff for 27 years and has seen the event move from the Animas Valley Mall to the Farmington Civic Center to the new Farmington Public Library. She advised shoppers to come to the sale armed with two things — patience and water.

She also recommended that shoppers whose purchases number in the dozens or hundreds of books bring a sheet to cover their stacks of selections before they head to the cashier to let other shoppers know those items are spoken for.

"This year, we're asking that people have about a 10-box limit, then take that up and pay for it," she said. "In the past, we've seen somebody's stack sit there all day, and nobody comes to claim it. Those were books that could have been sold."

The opening day of the sale is typically the busiest, Blue Eyes said, and the crowds thin out considerably by Sunday or Monday. But if you're looking for one genre in particular, it doesn't pay to wait, she said.

"If you like children's books, you need to come on Saturday," she said. "They're the first to go, usually."