There will be three other signs installed at different locations including the Bisti Highway, near Farmington Lake and U.S. Highway 64. 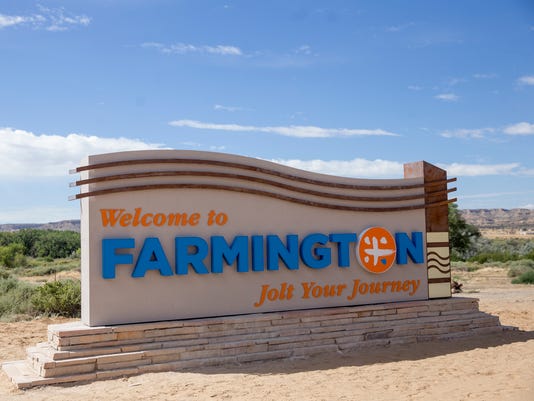 A new welcome sign as pictured on Thursday was installed Wednesday off of U.S. Highway 64 in Farmington.(Photo: Jon Austria/The Daily Times)Buy Photo

FARMINGTON — The first of four Farmington entry signs was installed Wednesday at the base of Harper Hill in Farmington.

The $240,000 sign project is part of a partnership between the city and the Farmington Convention and Visitors Bureau. The signs include the Farmington brand, Jolt Your Journey.

City Council approved construction of three of the four signs in March. Each monument costs between $40,000 and $50,000. The fourth sign's construction has not yet been approved because the location it will be placed is undergoing construction.

There will be three other signs installed at different locations. One will be placed on the Bisti Highway — New Mexico Highway 371 — near Ojo Court. Another will be placed at the turn off to Farmington Lake. The final sign will be installed at a not yet determined location on the city's eastern boundary on U.S. Highway 64. The final location will be decided after a highway widening project is completed.

Tonya Stinson, the executive director of the convention and visitors bureau, said the location on the Bisti Highway is currently undergoing rock work in preparation for the sign and there have been stakes set in the ground near Farmington Lake for the sign.

While the sign at the base of Harper Hill has been installed, the work there has not finished. Stinson said the electricity will be turned on to light up the sign at night and there will be landscaping work done around it.

Stinson said various groups have started work on getting entry way monuments for the past three decades, but have never been successful.

"You can't just take a piece of land and put something there," she said.

Through working with partners like Farmington, the convention and visitors' bureau was able to accomplish the feat. The signs reinforce the Jolt Your Journey brand and beautify the sections of the highways, Stinson said.

"It's a great, beautiful way to welcome people," she said.