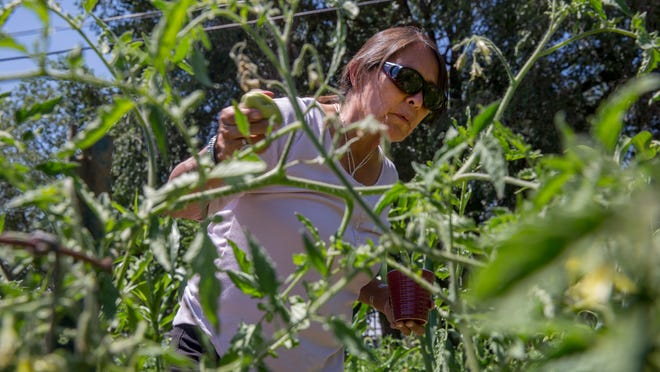 FARMINGTON — A community garden at New Beginnings will soon be redesigned with a better flood irrigation system.

New Beginnings is a transitional living program that is run by Navajo United Methodist Center next to Navajo Preparatory Academy. Some of the program's residents work in the garden, which also has community participants.

The irrigation system upgrades are partially funded by a grant from the National Association of Conservation Districts. The nearly $48,000 Urban Agriculture Conservation Grants Initiative funding was awarded to San Juan Soil and Water Conservation District last month. The program coordinator for the district, Molly Jackson-Nielsen, said the grant will go toward helping New Beginnings as well as other community gardens as part of the Farm Farmington! program.

Farm Farmington! will have a kick off meeting at 6 p.m. Sept. 6 at the Farmington Civic Center.

Over the past few months, the staff at the New Beginnings have been working to improve the garden with the help of community volunteers and donations. A new gated pipe system helps irrigate the garden.

"This year was all about stabilizing the water," Foo said.

In the upcoming years, New Beginnings will look at expanding its community garden. One of the possibilities is adding a farmers market, Foo said.

"People who drive past on Apache will be inspired," Foo said.

She said this could encourage people to eat healthier and provide fresh produce for people living in west Farmington.

Jackson-Nielsen said the other initiatives include home gardens at houses built by the Tres Rios Habitat for Humanity, expanding or improving the Aztec community garden and helping the Four Corners Foundation with its community garden efforts at the People Assisting the Homeless shelter in south Farmington.

Melissa May, the district coordinator for San Juan Soil and Water Conservation District, said her organization has predominantly helped large, rural farmers in the past. About a year ago, it began working with urban and community gardens.

"A lot of these gardens didn't know that there are other initiatives happening," May said.

Jackson-Neilsen said over the past few years there have been a variety of community gardens started in San Juan County. She said some have been more successful than others.

"It's not lacking in knowledge or passion or time," she said about the community gardens effort.

Farm Farmington will help these community garden initiatives network so they are not "reinventing the wheel," May said.

More:4 ways tech can help you grow the garden of your dreams this summer