The Chamber’s Citizen of the Year award was presented to Scott Michlin.

Event features 'Around the World' theme

The theme of the event was "Around the World," and it featured travel-theme “boarding passes” as event tickets.

Before presenting the awards, District Attorney Rick Tedrow, who served as master of ceremonies, told those gathered, “I’m honored to be captain for this trip around the world.”

Tedrow stuck to the travel theme while praising the local business community.

Tedrow went on to praise other business aspects within the community. 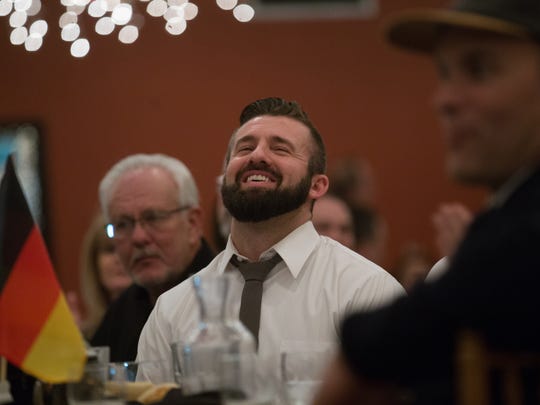 Steve Lien, club manager at Defined Fitness, reacts after his company is named Business of the Year Friday during the Farmington Chamber of Commerce banquet at the San Juan Country Club. (Photo: Jon Austria/The Daily Times)

“We have a world-class business infrastructure,” he said. “We are blessed to have the Riverwalk, the road systems and our river systems.”

Finally, Tedrow praised the people who live in the county.

“We have world-class human capital, and that’s the most important part,” he said, “We have businesses that invest in their employees and who believe in their potential. Here in Farmington, we are first class.”

Prior to the ceremony, Chamber of Commerce President Audra Winters said the award for Business of the Year was well deserved.

“Defined Fitness has really become involved not just with the chamber, but also with the community,” she said. “Any time people approach them for help with fundraisers, they’re always quick to give donations of things like memberships, and they get out and help with other projects such as Jolt Your Journey (the chamber's marketing campaign) and the Branding Alliance.”

Winters said another factor that contributed to this year’s choice is the way the business treats those who work there.

“One thing we look at is dedication to employees and the workplace atmosphere,” she said. “Whenever you stop in to Defined Fitness, you can really see that the employees enjoy being there — employees are also really encouraged to get involved in the community and to continue their education.”

Winters said Michlin was a natural choice for the Citizen of the Year award.

“It’s surprising that Scott hasn’t already won this award, because he serves on so many boards and is so involved in the community,” she said. “Any time someone needs a master of ceremonies for an event, he’s happy to do it, and he usually does it out of his own generosity.”

Before learning he had won the award, Michlin said that he was happy to be among those nominated.

“I wish I knew who nominated me,” he said. “So many others in the community have done so much, so it’s really an honor.”

“I have appreciated all the support from the community,” he said.

Among the community leaders present at the event was City Councilor Nate Duckett, who is also a Farmington Chamber of Commerce board member.

For more information about the Farmington Chamber of Commerce, visit gofarmington.com.